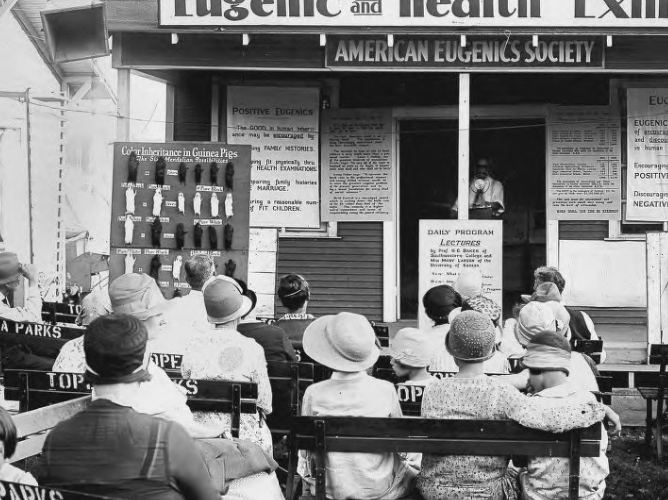 “If better livestock, why not better babies?” asked a member of the Grange in the pages of Philadelphia’s Farm Journal in December of 1913. It was a natural question occasioned by growing interest after 1900 in child development and concern over high infant mortality in the United States. Baby shows, long a staple of state and local fairs and church festivals, became contests to select “Better Babies,” in which young children were examined for physical and mental development and scored for points according to standards of weights and measurements, very much as livestock was scored at agricultural fairs.1 “The Search for Better Babies”, The Nebraska State Historical Society, www.NebraskaHistory.com

As the notion of improving the race physically gained impetus, abetted by preachers predicting the end of alcoholism and crime, eugenics was suddenly on everyone’s minds. Once the purview of bespectacled intellectuals and collared clergy, the movement swept across the country with amazing speed. In the heartland, the dark side, or “negative eugenics” gave way to the so-called “positive eugenics” of encouraging more judicious matchmaking, and “Better Babies” competitions at state fairs.

In the amiable fashion typical of Midwesterners, these contests were encouraging affairs. Nothing thrilled the young parents like a fair judge slapping a blue ribbon on their little offspring, as they did to 23-month old Arthur Van Gordon, proclaiming him “…a perfect baby, according to the decision of the committee on awards at the Better Baby show at the state fair … After the decision of the judges the baby was re-examined by the doctors, but not a blemish nor a defect could be found, although a scientific examination, including over 100 points was made. He was given a gold medal and $25.”

While the “better babies” movement would soon grow to include “fitter families”, it was the baby contests that grew the crowds, becoming a main attraction at state and county fairs, as well as other gatherings. Nowhere was the Better Baby more honored than in the Hoosier state of Indiana. Using the language of farm husbandry, Progressives found an eager and earnest audience among Indiana’s farm families. Perhaps, because the state was so homogenous, the adoption of the Child’s Creed raised so few eyebrows, with its talk of “pure blood” and the invocation of the Lord’s will in the business.

INDIANA CHILD CREED
Every child has the inalienable right to be born free from disease, free from deformity and with pure blood in its veins and arteries.
Every child has the inalienable right to be loved; to have its individuality respected; to be trained wisely in mind, body, and soul; to be protected from disease, from evil influences and evil persons; and to have a fair chance. In a word, to be brought up in the fear and admonition of the Lord.
That state is delinquent which does not ceaselessly strive to secure these inalienable rights to its children.

It is easy to dismiss the folks behind these efforts as fools or madmen, but there was just enough science in it to keep it respectable. Furthermore, better pre- and post-natal nutrition made a lot of sense and babies did get healthier. This was no small circus sideshow; it was a huge change in how people thought about public and private health. Young mothers devoured books about child nutrition. People began to recognize that slothful and dirty living conditions led to sick and sickly children. What children ate did affect their physical and emotional well-being. Still, there was an exclusivism about it that was hardly Christian. The woman behind it all in Indiana was Dr. Ada E. Schweitzer, who served as director of a newly-created Division of Infant and Child Hygiene in 1919 until the newly-elected Democratic Governor Paul McNutt scrapped the whole idea. It appears that that state’s male pediatricians were none too happy with the female-staffed bureaucracy that had sprung up around the Better Baby movement.

Indiana was an overwhelmingly Caucasian state, and so few protests met the decision that “Better Baby” contests were closed to African-American children. Of course, the eugenics movement was coming into full flower in 1930s Germany, and would largely disappear in the United States until the human engineering debates of the modern era.