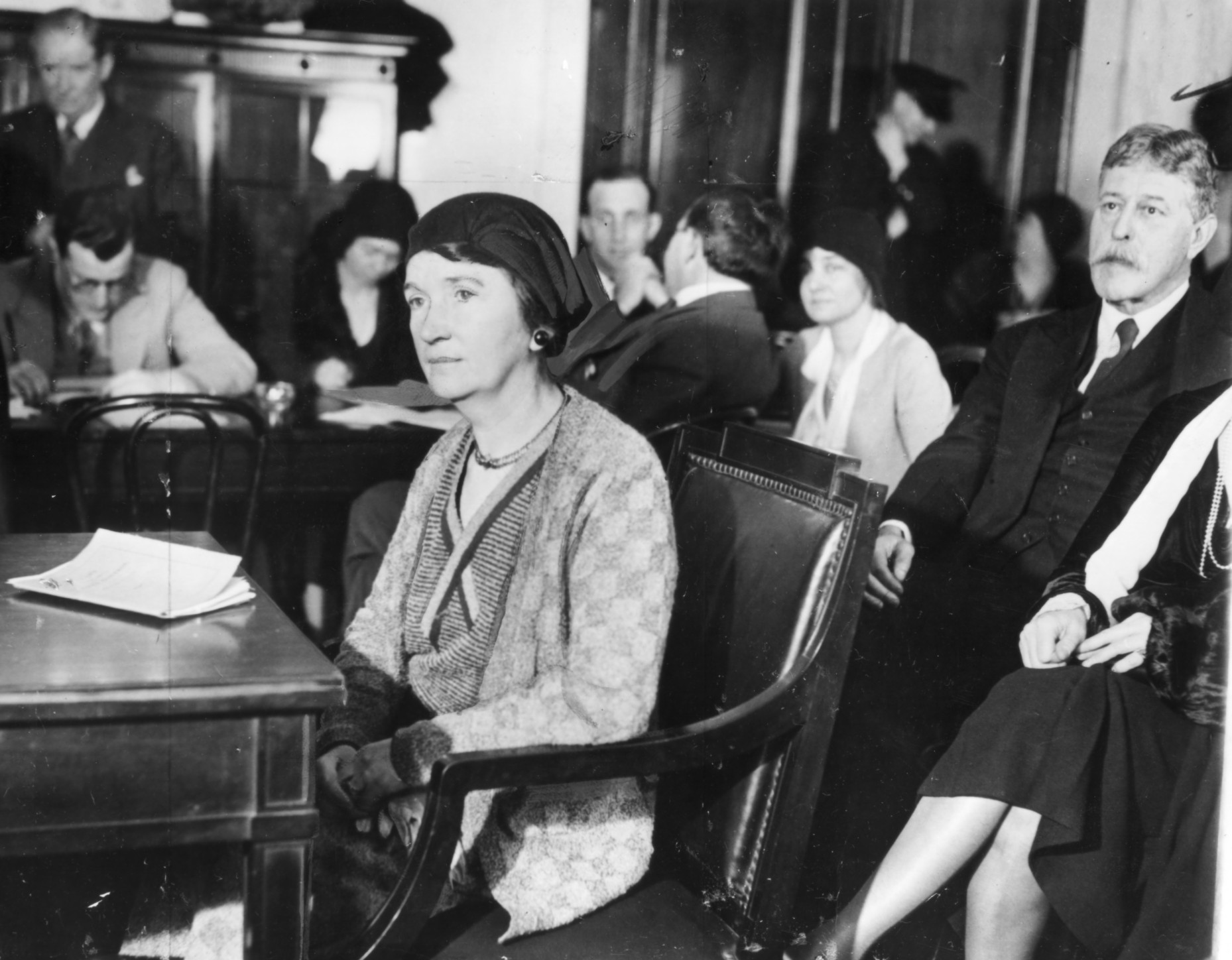 In the early years of the 20th Century, the “science” of eugenics spread across America, from pulpits to statehouses, with religious zeal. The underlying premise of the eugenics movement was that the undesirable traits of parents would invariably be passed on to their children. While the scientific basis for this assumption had little data to support its conclusions, the new “science” was quickly embraced by the American progressive movement and many of the wealthy.

Early funding for eugenics projects came from such well-heeled Americans as John Rockefeller, J.P. Morgan, and oil magnate and founder of the 3-in-1 Oil Company, James Noah H. Slee, the second husband of Planned Parenthood founder Margaret Sanger. The term eugenics was coined by Sir Francis Galton, a British anthropologist, progressive and scientist. The Galton family were prosperous Quakers who made their fortune in manufacturing guns.

A half-cousin of Charles Darwin, Galton saw the social implications of his cousin’s theories and developed the first early surveys to collect data on different population groups. That data was used to argue the case for aggressive social engineering to protect the vigor of the race. From the beginning, eugenics was aimed squarely at reducing or eliminating the less healthy or socially undesirable elements of society.

Eugenics found a ready audience in Germany, England and the United States, and led eventually to the founding of the American Eugenics Society. The AES was wildly successful in its efforts, resulting in more than half of the states adopting eugenics programs, often involving forced sterilization, and efforts to forbid some to marry or reproduce.

“In 1907, in an attempt to effect God’s will while resolving major social problems, the State of Indiana passed the first sterilization law in the United States. Other states of the nation were not far behind Indiana in approving sterilization legislation and, while California eventually became the nation’s leader in the campaign to sterilize the unfit, by mid-century some sixty thousand Americans had been deemed unfit or too dangerous to be a part of the nation’s gene pool and had been sterilized (pp. 47—8). This was accomplished with the specific approval of the Supreme Court of the United States which ruled, in a decision written by Justice Oliver Wendell Holmes, Jr.—Buck v. Bell (1927)—that states had a legal right to sterilize their citizens (pp. 151–2).”1 Project Muse, reporting on Saul Lerner’s Shofar: An Interdisciplinary Journal of Jewish Studies Volume 25, Number 1, Fall 2006. http://muse.jhu.edu/journals/sho/su mmary/v025/25.1lerner02.html

It dovetailed nicely with the “heaven on earth” theology then popular among liberal clergy, who had contests for the best pro-eugenics sermons. These sermons were then circulated to other preachers to be recited in pulpits across America.

The Right Reverend E.W. Barnes, Bishop of Birmingham put it this way in Some Reflections on Eugenics and Religion,2Eugenics Review, Apr 1926; 18(1): 7–14. where he pictures God as something of a divine gardener, using the harshness of nature to weed out the undesirable.

“The thought that God acts in this way is often disliked and ignored by those who wish to retain a belief in ethical Theism. They recoil from the idea that He permits degeneration as well as progress to take place. Their distress would be less acute if they remembered that environment is equally His creation. However perplexed we may be by the whole scheme, the fact remains that it has led to the successive emergence of more highly organized animal types culminating in man. And moreover, in man there has been, owing to this process, a growth of moral excellence and spiritual understanding. By spiritual un-derstanding, I mean man’s knowledge that the obligation of truth and goodness are imposed upon him from without by the very nature of things: that we ought to be loyal to absolute standards outside ourselves; that there are in the universe absolute standards that transcend space and will out last time. Man by acquiring such understanding has begun to enter the Kingdom of the good, the beautiful and the true.”

American churchmen would eventually add their own voices to the call to bring about the Golden Age. The most prominent of these ministers was Baptist Harry Emerson Fosdick, who served on the Advisory Board of the American Eugenics Society. Fosdick’s weekly radio program, National Vespers Hour, regularly drew two to three million listeners.

The apostles of population management were not without their critics. G. K. Chesterton wrote scathingly against the movement, including a 1917 work entitled: “Eugenics and Other Evils.” Franz Boas, deemed the “Father of American Anthropology,” took to the pages of The Scientific American in 1916 to denounce the movement.

Despite its packaging as “scientific,” and “healthy”, implicit in the movement was the notion that not only were certain individuals unfit to reproduce, whole ethnicities and races were equally unfit. The county fairs of America featured “Better Baby” contests, where African-American and Asian mothers were discouraged or barred from entering. The winners of these contests were invariably Caucasian. The United States Government implemented “preferred” nations in their immigration screening, making it more difficult for Southern Europeans, African-Americans and Asians to emigrate. Conferences and forums were held to earnestly discuss population breeding and management. Commenting upon one such proposed “congress” Margaret Sanger stated,

“The main objectives of the Population Congress is to … apply a stern and rigid policy of sterilization and segregation to that grade of population whose progeny is already tainted, or whose inheritance is such that objectionable traits may be transmitted to offspring.”4Sanger, Margaret, “A Plan for Peace,” published in Birth Control Review, April 1932, pp. 107-108.

Sanger’s targets were obvious. In her Autobiography, Sanger wrote,

“I accepted an invitation to talk to the women’s branch of the Ku Klux Klan … I saw through the door dim figures parading with banners and illuminated crosses … I was escorted to the platform, was introduced, and began to speak…In the end, through simple illustrations I believed I had accomplished my purpose. A dozen invitations to speak to similar groups were proffered.”

…by mid-century some sixty thousand Americans had been deemed unfit or too dangerous to be a part of the nation’s gene pool and had been sterilized.

The auxiliary of the Ku Klux Klan and the Women’s Christian Temperance Union had links through shared leadership roles, so Sanger’s feminism had a ready audience. This all seems surreal to the modern reader, who is inclined to categorize these “reformist” groups along different ideological axes, but such were the times. The Klan was prominent in the Prohibition movement, which shared much of the “science” of population control. The fact that eugenics provided a “scientific” basis to their racial segregationist bias was too tempting to resist. Sanger would later describe the meeting as one of the “weirdest” experiences she had in lecturing, and dismissed the Klan women as intellectually beneath her. She certainly knew, of course, what the Klan was all about when she accepted their invitation to speak.

Across the Northern border in Alberta, Canada, “Bible Bill” Aberhart and the left-leaning Social Credit Party would do them all one better, sending out roving government agents to identify candidates for forced sterilization. Even when German Nazism largely dampened enthusiasm for eugenics, the targeting of the poor, uneducated and non-white for sterilization continued in Alberta and some American states. That such efforts were blessed by the leading lights of American liberal Protestantism, and in Canada by the Dispensationalist crackpot Aberhart, is a sordid chapter in the history of both nations, and a stain on Christendom.

It is remarkable that eugenicists like Margaret Sanger were able to hold such repulsive views and yet continue to be feted by much of wealthy America. While comparing Aborigines to chimpanzees, Sanger would also rail against the “human weeds” and “parasites” represented by the disabled and indigent, arguing that they were costing taxpayers too much, while dragging down the race. She was sensitive, however, to the charge of genocide, and wrote to the African-American director of The Negro Project (a plan to build women’s health clinics in black neighborhoods),

“The most successful educational approach to the Negro is through a religious appeal. We do not want word to go out that we want to exterminate the Negro population and the Minister is the man who can straighten out that idea if it ever occurs to any of their more rebellious members.”

Conservative Protestants and Catholics wanted little to do with the eugenics and population control movements, for the most part, although there were exceptions. Sadly, the alliance of African-American Christians and white evangelicals that should have happened, given such shared beliefs, remained culturally elusive. Harry Emerson Fosdick, on the other hand, spoke the language of racial reconciliation and promoted civil rights. It’s also true that he flatly denied the Virgin Birth, the Resurrection and the Second Coming. By simply speaking to cultural concerns, Fosdick and liberal Protestants built bridges in the African-American community while Fundamentalists, and conservative Presbyterians and Baptists were unwittingly building walls. It remains one of the conundrums of the modern era that 11 AM on Sunday morning remains the most segregated hour in America.

An excerpt from a 1950 pamphlet disseminated by the Human Betterment League of North Carolina, a private group that promoted the sterilization of the state’s “mental defectives.” George H. Lawrence, superintendent of public welfare for Buncombe County, was the group’s founding president. Image courtesy of the N.C. Justice for Sterilization Victims Foundation website.

The response of Planned Parenthood is also a study in selective memory. While Planned Parenthood re-mains sensitive to criticism, and while working diligently to build alliances across economic, ethnic and racial divides, the organization nevertheless clings to the legacy of Sanger, in 1966 founding the Margaret Sanger Award. As evidence of that sensitivity, the award’s first presentation was to Dr. Martin Luther King. The following year, however, it was awarded to John D. Rockefeller III, cementing a family funding relationship many decades old.5The Rockefeller Foundation was also a major funder of German eugenics research facilities in pre-war Germany, including the laboratory of Otmar Freiherr von Verschuer, where Joseph Mengele received his training before breginning his work at Auschwitz.

While eugenics has long fallen into disfavor in polite circles, euthenasia and abortion are its bastard step-children in the modern era.

Let us hope that, given another chance, the American church will get it right.