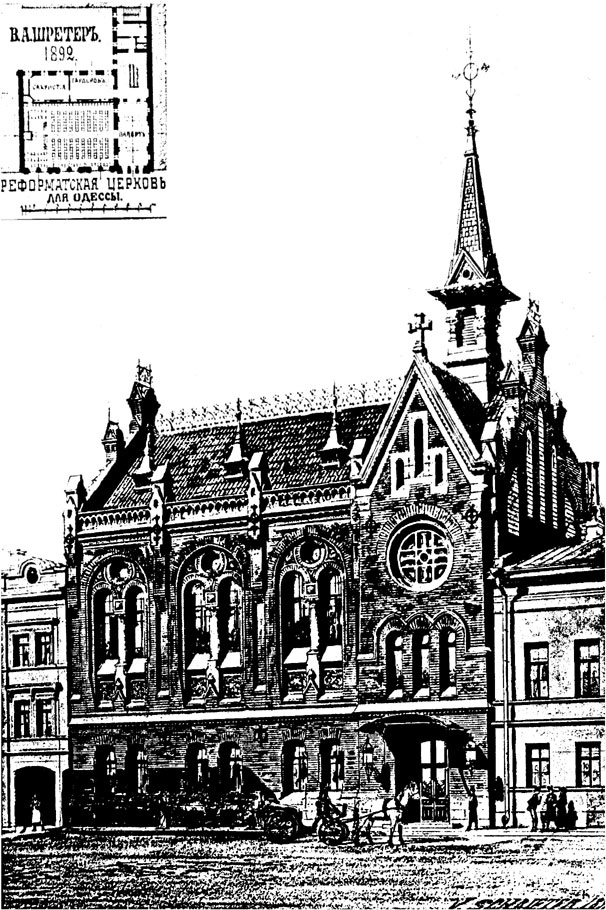 On Thanksgiving Day, 1998, the 100-year-old Reformed church was returned by the Ukrainian government to the Evangelical Presbyterian Church of Odessa. The church community had been disbanded and the building was taken in Communist times, converted to a puppet theater, then abandoned. It needed serious repair.

The Evangelical Presbyterian Church of Odessa was founded in 1994. In just 5 years, this work produced its own leadership, grew to an average attendance of 100 and expanded to 5 other cities. This has become a center for church-planters to Ukraine, Russia, and beyond.

The building has given them a home. It is located in the center of Odessa, visible and accessible from the university, city park, and the main streets of town.

The Pastera Street building is listed on the National Register of Ukraine, having won the architectural award at the turn of the century. V. A. Shreter was the architect, and other famous architects were consulted so that the style is similar to Odessa’s opera house and philharmonic hall. The 13,000 square foot building was built in 1898, and seats 500.

In that same year, representatives of various Protestant groups began meeting to address the urgent need for pastors. Soon, those working to establish a seminary included men from the Reformed (Liberated) Church of the Netherlands, the Presbyterian Church in America (PCA), the Hungarian Reformed Church and mission teams from International Theological Education Ministries (ITEM).

Established in Odessa in May, 2000, the Evangelical Reformed Seminary of Ukraine (ERSU) currently has an enrollment of 40 pastoral students who spend intensive 8-hour days in one and two week segments. The students then return to their home churches for several weeks of ministry and to complete their reading assignments, and then repeat the process.

Rev. Rod Gorter spearheads the project for ITEM, which is now involved in planting other seminaries across the territories of the old Soviet Union. ITEM in the United States is directed by PCA pastor Rev. David Ludwick.

Those who wish to support the seminary may send contributions to a special fund overseen by the PCA’s “Mission to the World,” 1600 North Brown Road, Lawrenceville, GA 30043, designated for Account #95995. Or, you may contact International Theological Education Ministries (ITEM), P.O. Box 31456, St. Louis, MO 63131, ITEM@ITEM.org.