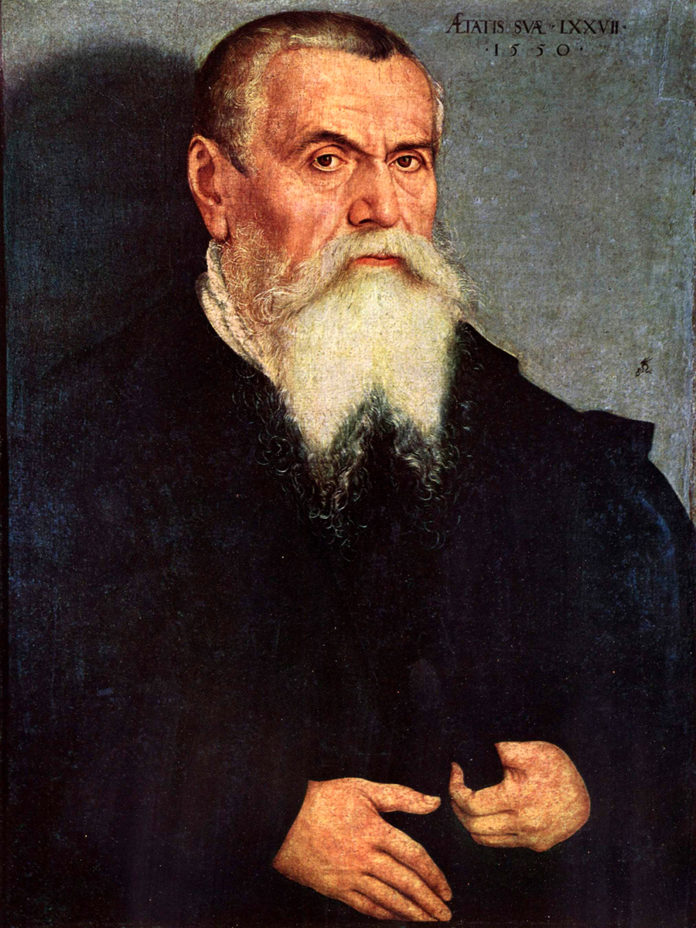 Such were the times, that a deformed calf discovered in the uterus of a Freiberg cow would become the stuff of prophecy. The “Monster of Saxony” had about its head a deformity that gave it the appearance of a monk’s cowl, a comparison Dr. Luther was quick to make in the form of a short tract published with a similarly-themed tract by Philip Melanchthon. The tracts, illustrated by Luther’s friend Lucas Cranach the Elder, went through many printings as part of a steady stream of tracts and pamphlets, and served to popularize Reformation themes. {footnote}Niccoli, Ottavia. Prophecy and People in Renaissance Italy.Translated by Lydia G. Cochrane. Princeton University Press, 1990.123-4{/footnote}

While Luther seems quite willing to cast the “monster” as a prophetic omen, it has more the ring of campaign rhetoric than theology. The comic book-like pamphlets were a powerful tool in communicating Luther’s anti-clerical message to the populace. The most devastating, entitled Passional Christi und AntiChristi, consisted of thirteen pairs of woodcuts by Cranach, to illustrate texts written by Melanchthon. The first set of woodcuts depicts Christ fleeing from the crowd intent upon crowning Him king, while the second shows the pope fighting to hold onto his tiara as others attempt to remove it. Melanchthon’s accompanying text reminds readers that the papacy’s claim to supremacy was based upon the spurious “Donation of Constantine,” a forgery only recently exposed.

Another pair of woodcuts depicts Christ washing the feet of His disciples while the pope’s feet are kissed by the secular rulers. Cranach’s images are so simple and accessible that the accompanying text seems almost superfluous. His final pair shows Christ ascending into Heaven while the Antichrist is dragged by demons into Hell. Such images were incendiary, and signaled that, for the Reformers of Saxony, the battle was joined and there would be no turning back.

TractWe know little of Lucas Cranach’s early life. He was born in Cronach, in Upper Franconia in 1472. Records in Wittenberg mention Cranach “for the first time in the public accounts on the 24th of June 1504, when he drew 50 gulden for the salary of half a year, as pictor ducalis. The only clue to Cranach’s settlement previous to his Wittenberg appointment is afforded by the knowledge that he owned a house at Gotha, and that Barbara Brengbier, his wife, was the daughter of a burgher of that city.”{footnote}http://www.nndb.com/people/177/000030087/ copyright 2007 by Soylent Communications{/footnote} 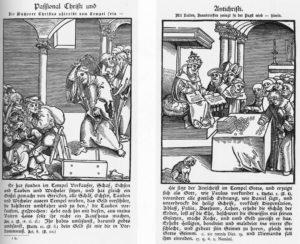 He was invited by Saxony’s ruler Frederick III to become his court painter, a post Cranach accepted in 1505 at the age of 33. In 1512, he bought a house in Wittenberg that still stands today. While it languished under the years of Communist rule, in the post-communist era a great deal of restoration work has occurred in Wittenberg. In January, 2007, the restoration of the Cranach Hus was completed and it is now open to the public, complete with visiting exhibits, a youth art academy and a workshop for artists.{footnote}Deutsche Welle; http://www.dw-world.de/dw/article/0,2144,2323993,00.html{/footnote}

Cranach’s flourishing business grew rapidly, and he soon added another large workspace employing dozens of apprentices. A few years later, the prosperous Cranach was chosen to serve as Wittenberg’s town treasurer. He was granted permission to open an apothecary on Schloss Street, where he also housed his recently-acquired and still very rare printing presses. Whether it was Luther, Melanchthon or Cranach who first realized just how powerful a tool printing presses had become, Schloss Street in tiny Wittenberg was soon churning out pamphlets and tracts that would change the world. While nothing can frustrate God’s plans or purposes, He clearly uses means. Housed only a short walk from the church door where Luther nailed his 95 Theses, Cranach’s printing presses insured that the winds of reformation would blow far and wide.

Cranach would live and work in Wittenberg for most of his remaining years, even serving three terms as mayor, but when John the Magnanimous (Johann Frederick I) is exiled for supporting the Reformation, Cranach joins him. First at Weimar, and later at Augsburg, where he served John as court painter until his death in 1553.

When Cranach and Luther became friends is uncertain, but they were obviously well-acquainted early, as Cranach and wife Barbara served as witnesses for the wedding of Martin Luther to Katerina von Bora. The influence on Cranach’s work is also apparent. His pre-Reformation art is characterized by paintings of Madonnas and various martyrs, while there is a noticeable shift in his later works to portraiture and themes of faith and grace.

“After 1517 he illustrates occasionally the old gospel themes, but he also gives expression to some of the thoughts of the Reformers. In a picture of 1518 at Leipzig, where a dying man offers “his soul to God, his body to earth, and his worldly goods to his relations,” the soul rises to meet the Trinity in heaven, and salvation is clearly shown to depend on faith and not on good works. Again sin and grace become a familiar subject of pictorial delineation.”{footnote}http://www.nndb.com/people/177/000030087/{/footnote}

It is Cranach to whom we are indebted for many of the images we have of the early Reformers. The artists “not only made portraits of Luther and other reformers, but gradually took many thoughts of Luther and with brush and paint created Evangelical sermons in paint.”{footnote}Agustana College Helios: http://helios.augustana.edu/~ew/powerpoint/cranach/synopsis.html{/footnote} His son, Lucas the Younger, was also an occasional collaborator in his efforts at serving the fledgling Reformation. Lucas the Younger completed the unfinished altarpiece in the Stadkirche in Weimar. The work represents Christ “in two forms, to the left trampling on Death and Satan, to the right crucified, with blood flowing from the lance wound. John the Baptist points to the suffering Christ, whilst the blood-stream falls on the head of Cranach, and Luther reads from his book the words, “The blood of Christ cleanseth from all sin.”{footnote}http://www.nndb.com/people/177/000030087{/footnote}