Had I desired to marry fourteen years ago, I would have chosen Eva von Schoenfeld, now Basilius’ wife. At that time I did not love my Catherine at all.”

But Martin grew to love his Katie more than he had ever imagined possible, and their marriage was a very practical picture of their theology, the great theology of the Reformation. It is likely that no marriage has done more for establishing and demonstrating to the world the power and beauty of the Gospel in a time when so many desperately needed to be rescued from the torments and prison of monasticism, depression, and guilt—all products of a burdensome and corrupted religion that had wreaked havoc upon the Church at that time. 1Plass, Ewald M. What Luther Says: A Practical In-Home Anthology for the Active Christian. Concordia Publishing House, St. Louis, MO, 1959. 887.

Not very much is known about Katharine von Bora’s early life, but it is clear that at an early age she devoted herself to a monastic life (whether this was her own choosing or that of her parents, we do not know), and by the age of twenty-two, she was living as a nun in the convent of Nimptsch. 2Anderson, James. Ladies of the Reformation: Memoirs of Distinguished Female Characters Belonging to the Period of the Sixteenth Century. W. G. Blackie and Co., Glasgow, 1856. 46.

Katharine was very devoted as a nun, but over time, she and some of the other women in the convent started to become interested in the work of Martin Luther. They became dissatisfied with their cloister life and eventually contacted Luther in hopes that he would help them escape their current situation. Keep in mind such an attempt was a capital offense at the time.

Yet, Martin immediately reacted to the request; he and Leonard Koppe worked together to plan the escape. Koppe knew the dangers involved in such a task, but he boldly pressed on, with the assistance of his nephew, Wolfgang Tomitzsch.3Ibid, 49.

It has been said that they devised a plan to carry the nuns in a covered wagon with herring barrels—one for each nun, providing a convenient way to keep their “cargo” hidden and safe. As the story goes, on the evening of Good Friday, April 4, 1523, the twelve nuns were able to escape through Katharine’s window into the court where they were then lifted over the walls and placed in the wagon. Some stories even note Katharine as having left her slipper behind in the court,4Ibid, 49-50.but none of these stories possess adequate proof to verify their accuracy.5“Escape.” Concordia Historical Institute. 1999. 26 November 2007. http://chi.lcms.org/katie /3.asp.

Nevertheless, the nuns were taken to Luther, who had vowed to find each one adequate support and care. Some were returned to their parents (if their parents would have them); others were married. Luther took great pleasure in finding perfect matches for each woman. Still, others, such as Katherine von Bora, were provided temporary homes.6Anderson, op. cit. 53.

As noted above, Luther apparently took no romantic interest in Katharine at this point in time (he thought her arrogant and prideful), but Katharine did develop a very close friendship with a man named Jeremy Baumgartner. They seemed to be mutually attracted to one another; however, after Mr. Baumgartner returned to his home that summer, he gave Katharine no further thought. Some think his family was able to discourage him from marrying a runaway nun. Still, Katharine had options, none of which suited her, and it became clear that she was set upon marrying Luther himself.7“Escape,” op. cit. 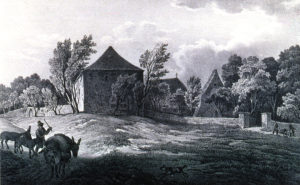 Luther eventually found himself conflicted. He would preach on the goodness of marriage, yet he would not marry. He would tell men they should not “wriggle out of being with a wife,”8“Marriage.” Concordia Historical Institute. 1999. 26 November 2007. http://chi.lcms.org/katie /4.asp. yet this is exactly what he had done. Luther had his reasons for avoiding marriage, the primary reason being that he feared what his reputation might do to him or a family,9Anderson, op.cit. 56. but on October 12, 1524, he threw off his monastic dress and began to entertain the idea of marriage…to his Katie.

When Luther (now forty-two years old) eventually proposed to Katharine (twenty-six) in June of 1525, even Katharine was a bit surprised. In fact, she thought he was joking at first. But when it became apparent that he was, indeed, serious, she immediately accepted his proposal, and they were married that very same day.Cloister-Inside

A union between a monk and a runaway nun was a slap in the face to the Roman church, and many did not take kindly to the offense. In fact, rumors about Martin and Katie spread like wildfire, and they were filled with vicious and horrible lies. Some said Martin and Katie were married so quickly because Katie was pregnant. Others published satires to mock their marriage. And still others looked down upon Martin for marrying during the Peasants’ revolt. Some even went so far as to say Antichrist would be born of their union.10Ibid. 61-63.

But their marriage turned out to be a happy one, and they grew in love and affection for each other more and more over time. Luther saw his marriage as a testimony of the Gospel presented in his actions.11Ibid. 62. It is because of the Gospel that he and his wife both were able to be released from the prison of the monastic lifestyle and enter into the joys of marriage.

“Katie was just what the Luther household needed. She brewed beer, bought cattle, drove a wagon, and was a loving wife and kind mother. Luther would call her the ‘boss of Zulsdorf,’ the name of the farm they owned.”12“Home Life.” Concordia Historical Institute. 1999. 26 November 2007. http://chi.lcms.org/katie /6.asp.

Katie, being a strong-willed woman, was known to be a little hasty and headstrong from time to time. Luther, picking up on this characteristic, liked to tease his wife by calling her “my lord Katy,” “my empress Katy,” and “my lord and Moses [lawgiver] Katy.” At one point he opened a letter to her with, “My kind and dear lord and master Katy, Lutheress, doctress, and priestess at Wittenberg.”13Anderson, op. cit. 67-68.

The two were known for their witty and sarcastic interaction (of which there are a few humorous examples recorded), but truth be told, Martin saw these industrious characteristics of Katie’s as virtues, and he was happy to allow her the pleasure and responsibility of running the farming establishment and household affairs with little to no interference on his part.14Ibid. 73. He trusted her to do these things well.

Luther once said of his wife, “I would not want to exchange my Katie for France nor for Venice to boot; to begin with (1) because God has given her to me and me to her; (2) because I often find that there are more shortcomings in other women than in my Katie; and although she, of course, has some too, these are nonetheless offset by far greater virtues; (3) because she keeps faith and honor in our marriage relation.”15Plass, op. cit. 888.

Katie was the perfect woman for Luther. She served as a faithful wife and mother (together they had six children), she was able to converse with all sorts of company (Luther had many guests—some of the most exceptional and sophisticated men in Wittenberg), she made him laugh, she worked hard, she cared for him when he was sick, she comforted him, she was strong, and she was always ready with an encouraging word (or a quick retort depending on the need of any given situation).

Together the rebellious monk and the runaway nun paved the way for the Christian family as we know it and provided a shining example of a truly biblical, Christ-centered marriage.

How to Cook Potatoes

Sectarians in America: The Life and Ministry of Philip William Otterbein