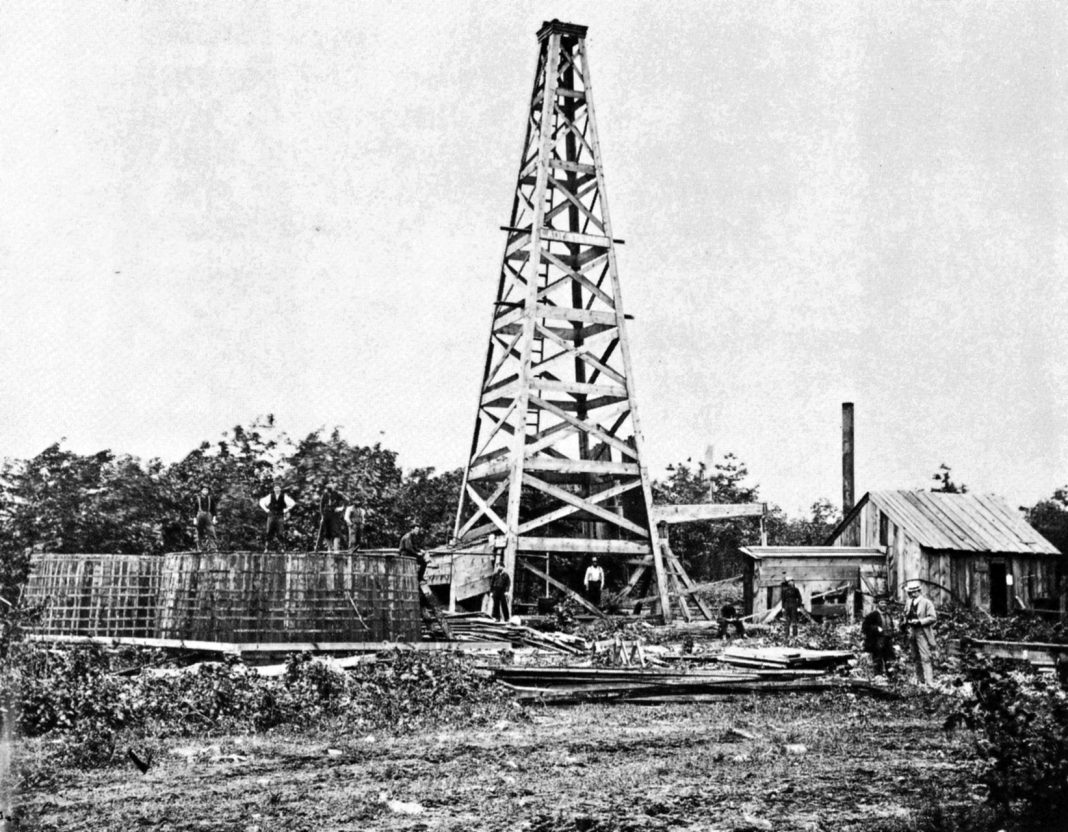 Apprenticed as a journeyman tanner, Lyman Stewart had little interest in oil at age 19, intending to become a missionary. Saving $125 toward his escape from tanning into missionary life, he plunged it into an oil gamble to increase his capital, but lost every cent. It took him a year to accumulate enough money from his tannery work to make a second plunge, and by then he was caught by the oil fever.

By the time he made his first big strike, wildcat oilman Lyman Stewart knew how he planned to spend the money. By the time he was finished, evangelical religion in America would be profoundly changed in ways that not even he could have imagined. Like his liberal nemesis, Baptist oilman John D. Rockefeller, Stewart had a vision of his own, one dedicated to religious fundamentalism and apocalyptic millennialism.

While Rockefeller was pouring his millions into one liberal institution after another, while teaching Sunday School at Chicago’s Erie Baptist Church, Stewart was busy laying the groundwork for his own two-fold mission, preserving civic morality in the nation, and restoring a commitment to the “fundamentals” of the Christian faith among the nation’s preachers.

Rockefeller hailed from the mainstream Northern Baptist denomination, while Stewart was born and raised a Pennsylvania Presbyterian. Born in 1840, he traced his religious fervor to a revival that swept through the area when he was a teenager. When the Civil War broke out, he enlisted in the Union army, returning in 1865 to find his hometown of Titusville a dramatically changed place. Oil derricks, shanty housing, bordellos and saloons had popped up everywhere, while oil fever caused many to walk away from their traditional trades to try their hand at wildcatting.

Stewart and his friends had some early success, but soon poured that success into a series of bad investments. Pulling up stakes, Stewart headed to California where he soon founded the Stewart Oil Company. At every turn, he and the other small producers found themselves beset by Rockefeller’s monopoly buying power, which combined with steep rail transportation costs, made real success a struggle. Convinced he must either grow or die, Stewart merged his company with two other local outfits to create Union Oil of California.

The turning point was a decision to build an alliance with the wildcatters of Kern County, California in the construction of a pipeline to circumvent Rockefeller’s monopoly. That deal became the storyline of Upton Sinclair’s Oil!, and the basis of the movie There Will Be Blood. Within a few short decades from its 1884 founding, Union Oil of California had become a powerhouse, literally and figuratively, reshaping the West and creating a major financial empire which its founder intended to be put to good use.

By 1909, Lyman and his brother Milton had come up with a secret plan to anonymously fund the printing and distribution of millions of pamphlets promoting “the Fundamentals” of the Christ-ian faith, initially focusing on orthodox tenets under attack by theological liberalism, namely, the Deity of Christ, the Virgin Birth, vicarious Atonement, the physical bodily Resurrection, and Biblical authority and inspiration.

Before long, the Presbyterian brothers open-ed up on liberalism across a broad front, attacking higher criticism, evolution, Mormonism, and Christian Scientism. What began as modest defense of orthodoxy became a veritable Pres-byterian Kulturkampf, laying down the gauntlet against liberalism in all its forms, including economic socialism. Baptist preacher A.C. Dixon was recruited as editor. Soon, a college was founded to serve as the boot camp for the new evangelical army, the Biblical Institute of Los Angeles, which soon became known by its shortened form, Biola.

A time would come when the followers of C.I. Scofield (who authored one of the pamphlets) would ask, as Dwight L. Moody asked, “Why polish brass on a sinking ship?” In the hands of a man like Stewart, however, the notion that the world was soon coming to an end meant there was so very much to do, and quickly at that. He turned down requests for endowments because he thought the Lord would not be particularly pleased to return, only to find His gifts all tied up in a trust fund instead of out promoting the Gospel. One suspects that in the case of Stewart, it was not the case of a good theology making a bad man better, but the opposite, a good man wringing a godly purpose out of a shallow and speculative theology.

Charles Hadden Spurgeon was unamused by the endless millennial theories and attempts to identify the “Anti-Christ,” once remarking “forgive me, I count them but mere bones for dogs; while men are dying and hell is filling … generation after generation of them have been proved to be in error by the mere lapse of time.” For men like Spurgeon and Stewart, no system or movement was allowed to get in the way of the imperative of the Gospel message. At bottom, both men understood that cultural battles might preserve, foster or delay, this or that development, but that in the end what mattered was that the Gospel reached the lost.

Some of these recollections seem odd to the modern reader because there had not yet come about that great separation between the millenialists and the conservative Calvinists. The “Bible Presbyterians” would remain enamored of Premillenial-ism, while other Calvinists would found Dallas Seminary. The Presbyterian Church in the United States would adopt far-reaching condemnations of theological liberalism and embrace the first written articulation of “Fundamentalism,” but the seeds of division were already sown.

Presumably, when laymen are providing the vision, a church body is already in trouble. And the Presbyter-ians were clearly in trouble. Men like Stewart were obviously prepared to work across denomination lines, as were such Presbyterian leaders such as Rev. Wilbur Chapman. Chapman and Billy Sunday launched massive “crusades” in cities large and small across the nation, focusing on evangelism. The tactics they developed would spawn a generation of tent ministries and stadium crusades by the likes of Billy Graham. Meanwhile, back at the seminaries, such “shows” were more likely to attract scoffing, while others retreated into the safety of an ivory-towered parochialism.

It almost came to a head in 1924, but Harry Emerson Fosdick opted to jump ship to the Baptists rather than face probable heresy charges at the General Assembly. The 1923 General Assembly had instructed Fosdick’s local presbytery to launch an investigation into his views following Fosdick’s famous 1921 sermon “Shall the Fundamentalists Win?” In that sermon, Fosdick directly challenged the doctrine of biblical inspiration. Fosdick’s new home at Riverside Church was underwritten by Rockefeller.

Modern readers may find it difficult to appreciate just how much such matters were in the public consciousness. Major theological battles garnered headlines, and brought out the big guns. Fosdick’s defense before Presbytery, for example, was conducted by none other than President Dwight Eisenhower’s future Secretary of State John Foster Dulles. It was a battle with many fronts, some theological and others cultural and regional. In the end, liberalism would carry the day in virtually all of the “mainline” Protestant denominations, with the conservatives forming essentially new institutional enclaves, including Bible colleges, seminaries and denominations.

Many local churches would opt for independency, while in its starkest manifestation the “Fundamentalist” movement would devolve into a cultural isolationism, a dull-scale retreat from society that would cause the most myopic two-kingdoms advocate to blanch. Having vanquished the conservatives to the cultural and theological backwaters, the liberal elite would be welcomed into the parlors of wealth, power and influence. It was, in many respects, a rout. The “independent Baptists” movement would adopt a reductionist theology served up with a strong dose of dispensational pre-millenialism, end times prophecy and a culturally-conditioned legalism. The Presbyterian conservatives would shift their intellectual capital to a new bank, this one at the newly-founded Westminster Seminary under the able tutelage of such intellectual giants as Gresham Machen, John Murray, Ned Stonehouse, R.B. Kuiper and Cornelius Van Til.

While a belief in the imminent return of Christ served as a catalyst for action to men like Lyman Stewart, it was also often accompanied by a spirit of speculation given to modern-day prophecy. Stewart avoided investing in England prior to WWI because a respected preacher had prophesied to him that England was coming under judgment for promoting opium among the Chinese. Whether England ended up in a costly war because of acting as opium dealers to China, one thing is clear, God providentially blessed many of Stewart’s ventures. In many ways it is very comforting to know that the Lord may bless us when we are wrong, when our actions spring from a godly, albeit misguided zeal. Let us make sure we get it right, of course. It is an endorsement of zeal, not ignorance.

Whatever his failings, we will be faithful soldiers indeed if we but aspire to a small measure of Stewart’s accomplishments for Christ’s kingdom. I often stop at a Union 76 filling station near my local church. I haven’t given much thought to it before, but I don’t think I will ever pass it again without thinking of Lyman Stewart. Union 76 is now just a brand name gobbled up by Chevron many years ago. We could, given time, trace all of the dollars Lyman Stewart made, but the untold tens of thousands who were blessed by his promotion of the Gospel, the many who walk in faith today thanks to his faithfulness, are treasures too vast to count.

I often wonder if the Lord is, even now, raising up such visionaries who will change the world on such a grand scale as the men of that time and place. We tend to take our testimonies in small doses today, celebrating the little victories we dare to nervously bring to the world’s attention. As in Stewart’s time, there are evangelical voices sounding the retreat, but there is also a quickening spirit that shall not be quenched. May we live our lives expecting great things from a great and merciful God.