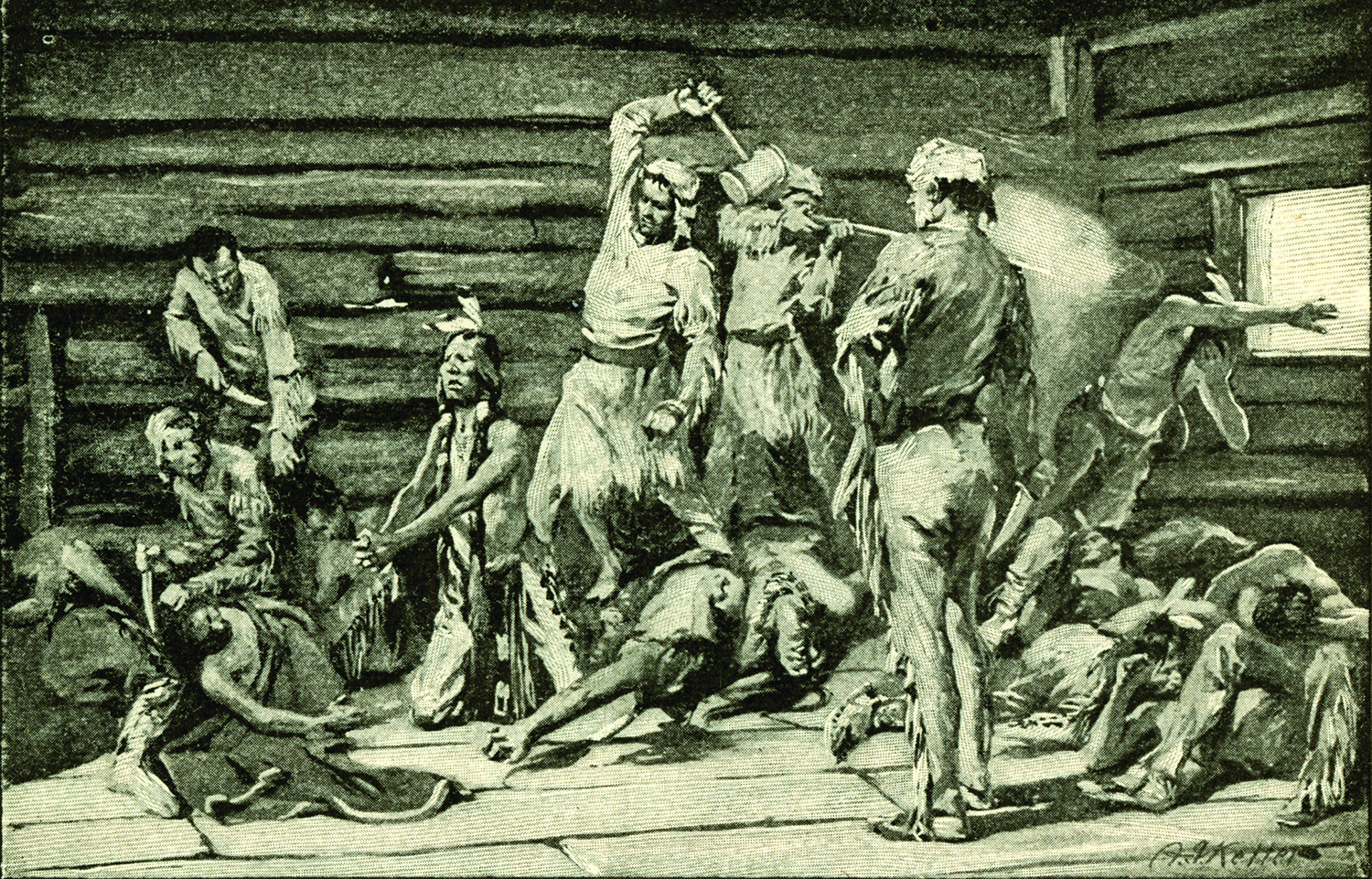 1776 was a monumental year in North America. While it would be very easy to focus all of our attention on the eastern seaboard, in the wilds of eastern Ohio a small village was founded whose story would be one of the most tragic of the westward expansion.

The story actually begins sometime around the year 1740, when Moravian missionaries began to preach the gospel to the Delaware Indians. Over the years they saw many converted to a lively faith in the Lord Jesus Christ. These Indian converts began to settle in villages in eastern Pennsylvania and take up farming. But in 1755, during the early years of the French and Indian Wars, one of the villages, named Gnadenhutten, was attacked by Muncee Indians. The village was destroyed and many of the settlers were killed. One of the survivors, a boy named Gottlob Senseman, grew up to be a pastor and he, along with two Moravian missionaries, David Zeisberger and John Heckewelder, eventually led the peaceful Moravian Christians into the Ohio Valley in order to start over. The settlers established villages along the Muskingum River. The villages were named Schoenbrunn, Salem, and Gnadenhutten.

Once the Moravian settlers established themselves, they began to prosper and many more Indians converted including a large group of Mohicans. But not all was well. The white settlers began to be suspicious of the Moravians and the unconverted Indian tribes were suspicious of them as well. Rumors began to circulate that the Moravians were stealing cattle and were untrustworthy. Nevertheless, by the time the colonies declared independence from the British crown, the leaders of the Moravian villages assumed that they would be spared any violence since they were so far from the center of action. Sadly, this was not to be the case. The loyalists and patriots would soon bring the conflict to the Ohio Valley.

In September of 1781, during some of the fiercest fighting in the west, the Moravian Indian villages were attacked by Wyandot Indians allied to the British and they were forcibly relocated to an area called “Captive Town” near Lake Erie on the Sandusky River. The leaders, David Zeisberger and John Heckewelder, were arrested and transported to Detroit to be tried for treason in a British court. The British thought that the Moravian Indians were providing the American forces at Fort Pitt with information about the British troop movements. The sites which David Zeisberger and John Heckewelder chose for the settlements were along well-traveled war-paths and the villagers saw many Indian, British and American forces move through the area. It was the custom of the Moravians to help anyone who asked. They would customarily trade with Indian raiding parties returning from their missions, and they would assist patriot militiamen who were in the area. Whether or not the Moravians were providing military intelligence is disputed, but the strongest evidence indicates that they did keep the garrison at Fort Pitt informed. Nevertheless, the court in Detroit acquitted David Zeisberger and John Heckewelder and they returned to Captive Town.

It was now February of 1782, and the internees at Captive Town were facing the increasing prospect of starvation. About 100 of them set out to return to their villages with the intent of trying to glean the grain which was left in the fields if any had survived the winter. It was a desperate attempt by desperate people, but it was the only available option. Once they received permission to return, they immediately began their journey home. Little did they know that events in the area of Fort Pitt would set in motion a chain of events which led to one of the most horrific events of the time.

In the middle of 1781, the war-like Indian tribes of eastern Ohio continually raided western Pennsylvania and killed many of the white settlers there. In response, a taskforce of two companies of Pennsylvania militia was dispatched from Fort Pitt under the command of Captain David Williamson. The militia entered eastern Ohio and ended up capturing some Moravian Indians. The militia wanted to exact revenge on the spot, but Captain Williamson took the prisoners back to Fort Pitt.

Surprisingly, and inexplicably to Captain Williamson and the militiamen, the authorities at Fort Pitt released the prisoners and sent them back to Ohio. The very night in which the released Moravians left Fort Pitt, raiding Indians killed and scalped a number of white settlers near Fort Pitt. The Moravian Indians were immediately suspected of perpetrating the murders and the venom of revenge began to infect the militiamen and their commander.

By February of 1782, as the Indian raids continued, Captain Williamson set out in hot pursuit of a raiding party which had struck near the fort. The massacre was gruesome in its barbarity. The fleeing Indians even took the captured wife and child of one of the militiamen and, after stripping, killing and scalping them, put them on stakes in the path of the pursuing soldiers. As one could imagine, the fires of retaliation were stoked to an intense degree. The fleeing raiding party was headed straight for the village of Gnadenhutten and the enraged militiamen followed hard on them. When the raiding party reached Gnadenhutten, they traded with the Christian Indians like they had done before. Even after the peaceful residents of Gnadenhutten said that they did not have anything else to trade, the raiding party simply left much of the plunder in the village. When the militia saw all of the plunder in the village, this act sealed the fate of the residents of the village.

When the Pennsylvania militiamen entered the village, they did not attack it. Rather, in a cold calculation, they entered in a peaceable manner. They claimed to be there to escort them back to Fort Pitt for safety. With no suspicion of ill intent, the residents of the village gladly gave up the means to defend themselves and prepared for the journey. Also, a group was sent to the nearby village of Salem to bring them to Gnadenhutten as well. When they returned from Salem, the militia locked up the peaceful Christian Indians in two houses (one for the adult men and one for the women and children) and a council of war was called to determine what to do with the prisoners.

The officers of the militia were unwilling to make the decision themselves so they left it to a majority vote of the troops! The process was described thus:

“The line was soon formed, and they were told it remained with them to say, whether the Moravian prisoners should be taken to Fort Pitt or murdered; and Col. Williamson requested that those who were inclined to mercy, should advance and form a second link, that it might be seen on which side was the majority. Alas! It required no scrutiny to determine. Only sixteen, or at most eighteen men, stepped forward to save the lives of this unfortunate people, and their doom became sealed.”

Meanwhile, recognizing that they were likely to die, the devout Indian Christians began to pray, sing, and encourage one another to be steadfast. Upon being notified that they were all condemned to die, in a most tender scene, they embraced each other and sought to resolve any lingering offenses against one another. So when their captors asked if they were not yet prepared, they said, “Yes! We have commended our souls to God, and are ready to die.”

The soldiers designated two of the village structures as “slaughter-houses” and led the prisoners out in twos, bound together. They began with the ones who they assumed were the most culpable for the attacks in Pennsylvania. Upon bringing them into the slaughter-house, they were told to kneel and then they were dispatched by spear, tomahawk, knife, war-club, and even a cooper’s mallet which had been found in one of the buildings was used to bash-in the heads of the victims. After being murdered, most of them were scalped. The militia made no distinction between young and old, male or female. On that day, ninety-six innocent Christian men, women and children were mercilessly killed. With Christian fortitude, the Indians of Gnadenhutten met their murderers and were taken from this world. Yet, not all were killed that day.

One young man was knocked to the floor and scalped, but he did not die. He stayed still in that position while the murders continued around him and after nightfall, he escaped. Another survived by dropping through a trapdoor during the mayhem and stayed below the floor while the blood from the victims showered on him from above. He escaped without harm. The survivors were able to warn other Indian Christians and no more Moravians in other villages were murdered. After the bloody deed was done, the militiamen plundered the village and put the structures to the torch, with the bodies still inside.

Sadly, the massacre of innocent and helpless Indian believers was met with little outrage and even some approval. None of the perpetrators were ever punished, but there was an effect. The already present distrust and suspicion between the white settlers and Indian tribes was perpetuated. The lesson was not lost on the tribes.

A little less than thirty years later, in 1810, the Indian chief, Tecumseh, who was a boy in Ohio at the time of the massacre, reminded his antagonist, William Henry Harrison during treaty negotiations, “You recall the time when the Jesus Indians of the Delawares lived near the Americans, and had confidence in their promises of friendship, and thought they were secure, yet the Americans murdered all the men, women, and children, even as they prayed to Jesus?”

The “Jesus Indians of the Delawares” sought to live at peace with all men. And when the time came for them to die, they were true to their convictions. They expressed their faith both in life and in death.