The following is excerpted from William Boekestein’s forthcoming Shepherd Warrior, the story of Zwingi in Zurich, written for young readers. Boekestein puts us in the presence of the players on the stage.  The events are real enough, although the dialogue is fictionalized. While this is not our usual format, we were so pleased to see a new Zwingli biographical treatment in honor of the 500th Anniversary of the beginning of the Swiss Reformation. Zwingli tells us that he “began to preach the Gospel of Christ in 1516, long before anyone in our region had ever heard of Luther”.  While some quibble over who began first, Luther or Zwingli, let it suffice to give God the glory for the parallel paths of Reformation in Germany and Switzerland, for we might as easily credit Hus 100 years before.

By the early 1520s there was no doubt; the church in Zurich Switzerland was changing. Through steady preaching and teaching by Ulrich Zwingli and other protestant ministers the church began to look increasingly less Roman Catholic. But one thing had not changed. This one thing continued to unite the Zurich churches to the Church of Rome. The reforming churches still practiced the mass. In the Catholic mass, the bread and wine of Holy Communion are believed to mystically become the body and blood of Jesus Christ. With this understanding, Christ is bodily present on the altar. His crucifixion is re-presented before the people. And the worshippers feed on Christ through the mediation of the priest.

In the early part of the previous decade Zwingli had sat in the Milan Cathedral while serving as chaplain during the Italian Wars. Still, he could clearly recall the wonder that swept over his mind as he learned that a fourth century bishop named Ambrose had made significant changes to the church calendar and the mass within his parish. Over the years he had often asked himself, “If Bishop Ambrose was able to make changes to the mass in his day, is there any reason we can’t do the same today?”

For years, Zwingli and his friends—including Leo Jud and Oswald Myconius—had been teaching against the Catholic mass. Their teaching had been so effective that in many parishes Holy Communion was no longer being celebrated at all. The priests were unwilling to read the traditional mass, but had nothing to use in its place.

On Tuesday afternoon, the week before Easter 1525, Zwingli, Jud, Myconius and several other ministers sat around the table in the Zwingli home. A small fire crackled on the stone hearth. The men used thick slices of bread to wipe from the bowls the last remnants of potato-cheese soup.

Zwingli slid his fingers under his black wool hat to scratch through his thick red hair. He pondered the words of a minister seated across the table. “Men, if the city council grants this request,” the man had said, “we all become heretics. Rome will no longer acknowledge us as Christians or protect us as citizens of God’s kingdom.”

For a moment, besides the fire, the only sound in the house came from the rocking of Zwingli’s wife Anna’s chair in the adjacent parlor as she nursed to sleep their infant Regula.

“My dear friend,” sighed the forty-two year old pastor, “that day will soon dawn on us, regardless of this petition. But, I say the time is right. We cannot continue to preach a living Christ and then imagine that we can serve him on a platter. The mass is not a sacrifice, but a remembrance of the sacrifice and assurance of the salvation which Christ has given us. How could our Lord have said, ‘do this in remembrance of me’ if in the Supper he would be physically present? One does not ‘remember’ one whose body is before his eyes. Until our people understand this, they will remain chained to the devices of Rome and her mercenary priests.”

While he spoke Zwingli’s hands had held open his pocket Bible to 1 Corinthians 11. As both hands formed fists and came to rest firmly on the table the pages of his Bible fanned shut. The pages stopped at the back paper on which he had neatly penned dates and events that were close to his heart. The most recent entry read, “Regula Zwingli was born in the year of our Lord 1524, on the last day of July, a Sunday, before daybreak, almost exactly midway between two and three o’clock.” The couples’ firstborn was named after one of the patron saints of Zurich.

The thudding of her father’s fists on the table briefly roused awake the nursing baby.

“The people are ready, friends,” assured Myconius, after a moment’s thought. “And so is the council. Well over half of the great council supports Master Zwingli. And most of them are ready to act.”

“If God has so judged,” grinned Jud, “Then let’s not keep your darling baby awake any longer.” He jumped to his feet, swiping the freshly-inked parchment from the table. “Dearest Anna,” Jud leaned his head around the wall to look into the parlor; a smile played on his face. “Before this week is up, your husband will be more famous in this diocese than the bishop.”

“Master Jud,” she answered, “All I care about is that he is precious in God’s eyes. And that, he already is.”

“And in yours too, I hope?” asked her husband.

“Of course, dear. I wouldn’t tolerate all these clandestine meetings in my house if you weren’t my most beloved friend.”

“She’s an angel of a wife, men!” Zwingli said with more than usual passion.

“Let’s be going brothers, before our ‘Eros’ gets sidetracked,” joked Jud.

“And be going with courage, men,” added Zwingli. “As you take with you your well-filled stomachs, take also God’s word. It is the word of God that sustains the soul of man, as food sustains his body.”

As the pastors approached the thick paneled doors of the city hall, they were joined by burgomaster Roust, who with the cuff of his jerkin was just wiping from his mustache the last of his grilled fish. “Judging by the determined looks on the faces of this fine assembly, I think I should return to the pub for another drink,” muttered the burgomaster. “Your business smells of trouble, or I’m not the master of this city,” he finished.

“Lord Roust,” answered Zwingli, “The only trouble we hope to create, is for those taskmasters who hold the children of your dear city in spiritual prison. We aim to break their necks and we think you and your friends will help.”

They did. By a narrow vote, the council ruled that in Zurich the Catholic mass would be replaced by a simple, biblical communion service. In two days’ time, the reforming churches of Zurich would make their most daring and definitive break from the old Roman church the people had always known.

The waning sun flicked the colors of stained glass upon the worshippers as they entered the Great Minster church. By custom, the men and women separated at the aisle and sat on opposite sides. It was Maundy Thursday, the day to remember when Christ washed the feet of his disciples and served them their Last Supper together. A rumor had spread that the mass had been outlawed in Zurich. Out of habit, and now also out of curiosity, the worshippers glanced in the direction of the altar, the table upon which the priests had always claimed to re-present Christ’s sacrifice on the cross and from which they claimed to distribute the real body and blood of Jesus. What they saw was unrecognizable. It seemed that all eyes were fastened on the strange sight at the front of the church.

Gone was the massive stone table, wrapped with an ornamental stole, and covered with a red silk canopy which—suspended above the table—had protected the altar from dust. Gone were the ornate brass candlesticks, old symbols of the two peoples, Jews and Gentiles, who rejoiced at Christ’s birth. Gone was the cross which had always stood between the two candlesticks. Gone was the chalice, the gold wine goblet lavishly adorned with precious stones, and the matching golden box that housed the bread. Gone was the sun-shaped shrine into which a piece of bread was placed to be displayed to the faithful.

Instead, they saw an ordinary wooden table, draped with a clean linen cloth. Upon the table sat wooden plates of bread and wooden cups of wine. More than one worshipper, of the more educated sort, remembered that wooden vessels could not be consecrated by the bishop. What they were about to celebrate would not be a Roman Catholic mass.

When Catholic priests performed the mass, they stood between the congregation and the altar, with their backs to the people. But after leading the people in prayer and Scripture readings, and delivering a brief sermon, Pastor Zwingli—wearing his dark scholars gown—descended the pulpit and stood behind the table facing the congregation. His face was sober, but welcoming. His bright eyes spread among his friends the love he had for them in his heart.

“Listen to the words of our beloved Savior,” began the minister. “Most assuredly, I say to you, he who believes in Me has everlasting life. I am the bread of life…I am the living bread which came down from heaven. If anyone eats of this bread, he will live forever; and the bread that I shall give is My flesh, which I shall give for the life of the world.” 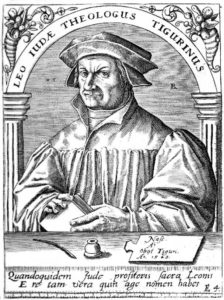 “You hunger and thirst. But not just for food. In this meal you receive food and drink but not through your mouths. You who take part in this public thanksgiving prove to the whole church that you are of the number of those who trust in the Christ who died for us. Believe in Christ and be thankful!”

With warm solemnity Zwingli passed the wooden plates to his attendants who passed them down the pews of Christian worshippers. As each plate was passed, a neighbor or family member held it out to his friend, who tore off a piece of bread with his own hand. With wide eyes and pounding hearts, the worshippers also received the wooden cups of wine—for centuries the average church-goer was denied the cup. Each worshipper took an invigorating swig of wine before passing the cup to his brother or sister. The congregation of the Great Minster, for the first time experienced a family meal commemorating the suffering and death of their Lord. No longer was a priest mediating their religious experience. Instead, brothers and sisters passed between themselves a memorial of Jesus’ reconciling work.

At the conclusion of the meal the congregation stood to raise their voices with the words of Psalm 113.

He lifts the poor and makes them great,

With joy He fills the desolate;

Praise ye the Lord and bless His name,

The reformed church in Zurich had formally severed ties with Rome. The poor and desolate people of the canton had never felt so great or joyful.

William Boekestein is the pastor of Immanuel Fellowship Church in Kalamazoo, Michigan. This article is an edited chapter from his newest book, Shepherd Warrior, a biography of Ulrich Zwingli for young readers (Christian Focus Publications, 2016).