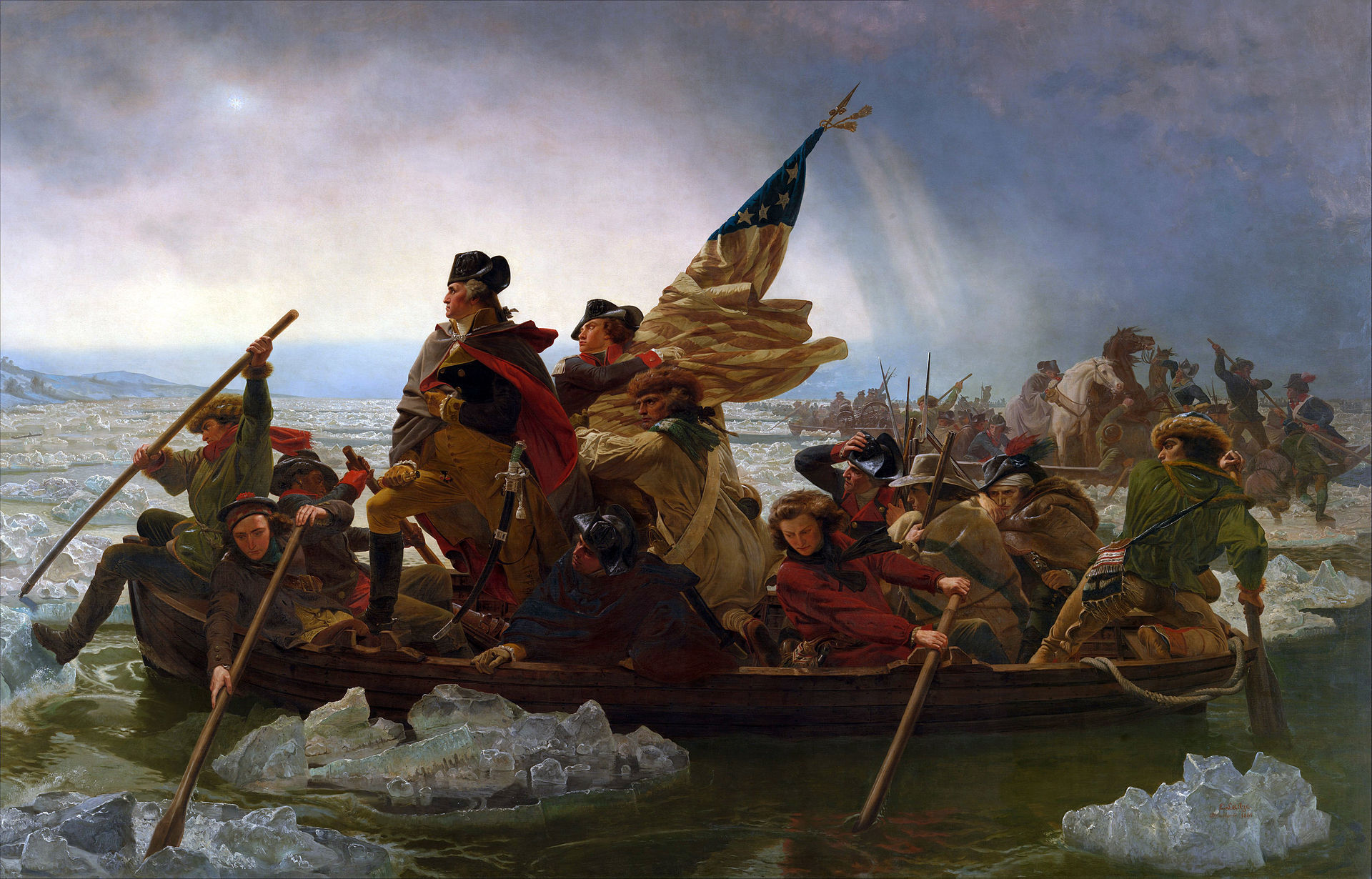 From Crossing of the Delaware, to Valley Forge, to Victory at Yorktown

The new Declaration of Independence would not be signed for another two months, but in Germantown, Pennsylvania, the battles lines were already drawn, and there would be no turning back.

“Fired by a spirit of patriotism for the cause which he deemed to be right, realizing no doubt, the dangerous undertaking in which he was about to embark, knowing full well that if his cause failed, prison or death, and the confiscation of his property awaited him, probably against the advice of many friends, and some relatives, and at the very beginning of the crisis, when the responsibility was fraught with the greatest danger, Peter Humrickhouse, acting from the dictates of his own conscience, in the month of May, 1776, entered the American Army as a volunteer in a private company that was formed in Philadelphia County, Pa, under the command of Captain Thomas Dunking, to fight and die, if need be, in the cause for American Independence.”1Harry H. Humrichouse, Rev. Christian Post and Peter Humrickhouse and Some of the Latter’s Family (1913), 14.

The threads of the Humrickhouse saga, like most great stories, are gathered one by one, from myriad sources (including Reformed Church records), until a picture emerges of a decent and honorable man, whose faith and courage personified a generation of Americans.

Born on October 10, 1753, in Philadelphia, Peter moved with his family to Germantown when he was eighteen. We know that his father died only a year later, in May 1772. It was four years after that when Peter, at age 22, answered the call of his country and enlisted in the colonial army with the very first company of soldiers to leave Philadelphia for the front.2Ibid.

They arrived near Trenton, and placed themselves under the command of General Washington. Humrickhouse applied for an Ensign’s commission in what was known as the “Flying Camp,” then commanded by General Mercer. Peter received his Ensign’s commission in July 1776 and took command of a contingent of Continentals at New Ark. Washington commanded Harlem Heights, forcing British General William Howe to take the war into New Jersey. Howe dislodged the Americans from Fort Washington and turned on Fort Lee.

If Washington lost his forces at Fort Lee, the war may well have ended very soon. Washington withdrew his hungry and ill-clothed troops back across the Delaware, a humiliating and discouraging retreat. Humrickhouse accompanied Washington on this depressing flight. Illness and desertion afflicted the dwindling force, and Humrickhouse was named a Lieutenant.

The country was despondent, and many believed defeat inevitable, but Washington immediately devised a plan to retake Trenton and take the battle to the enemy. His bold plan called for re-crossing the Delaware in the midst of winter, in hopes of surprising the British and Hessian troops. With enlistments due to expire, Washington needed to act quickly. On a cold and forbidding Christmas night, December 25, 1776, the plan was launched.

“At dusk, the Continental troops selected for the service by General Washington in person, amounting to 2,500 men, with twenty pieces of artillery, began to cross at McKonkey’s Ferry, nine miles above Trenton, and it was supposed they would all be crossed over by mid-night; but the floating ice retarded the boats so much, that it was not until four o’clock in the morning before the whole body, with artillery were landed. The British and Hessians were taken by surprise and tried to retreat toward Princeton, but were checked. Finding themselves surrounded, they surrendered, about a thousand in all. Peter Humrickhouse was with Washington on this occasion….”3Ibid., 14-15.

The battle was enormously important for the American cause, not only showing that the colonial army could hold its own against professional troops, but it breathed new hope into the political leadership that the war, in fact, could be won. Indeed, some who were present at the Battle of Trenton would play important roles of their own. James Madison and James Monroe (who was wounded) would serve as presidents of the new nation. John Marshall would become the first Chief Justice of the Supreme Court. Alexander Hamilton and Aaron Burr would write their own unique chapter in the founding of our nation.

After the battle, General Washington personally selected Peter Humrickhouse to serve as Officer of the Day, which included the duty of arranging, under a flag of truce, for burial of the dead. A few weeks later, his enlistment expired and Peter Humrickhouse returned home to Germantown where, on February 20, 1777, he married his “beloved Mary” Hadelman (sometimes written Stadleman).4Ibid., 14-16

The new country had not yet yielded its claim on the young soldier’s sense of duty, and with winter approaching, Peter Humrickhouse re-enlisted in the Continental Army as a Captain in the 2nd Battalion of Philadelphia. The battalion was ordered to defend Germantown and on October 4, 1777, met the British in the Battle of Germantown in which Humrickhouse says in his application for pension after the war, “our men suffered extremely.”5Peter Humrickhouse, Application for Pension, War Office Department, December 12, 1838, as quoted by Humrickhouse, op.cit.

The suffering was only the beginning, as the men now headed for winter encampment at a place that will be forever emblazoned on the American consciousness—Valley Forge.

It appears that Humrickhouse served until the end of the war, and in fact, was chosen by General Washington to secretly smuggle eight four-horse wagons of powder to the troops at Yorktown, a courageous act that took three months, but the success of which contributed to the American victory at Yorktown and helped secure American Independence. The powder was placed in barrels disguised as whiskey. General Washington personally commended Humrickhouse for this mission, the commendation of which was filed with the War Department, but which is now lost.6Harry H. Humrickhouse, op. cit.

After the war, Peter Humrickhouse returned to Mary and took up the trade of carriage maker until 1798, when the yellow fever outbreak prompted the family to move to Hagerstown. Peter and Mary had thirteen children. Germantown Reformed Church records note that Rev. L. Frederick Hermann baptized Jacob and Christian Frederick, the seventh and eighth children of “Peter Umringhaus and Anna Maria” on August 14, 1791,718th Century Records of the Germantown Reformed Church of Pennsylvania, (Westminster, MD: Family Line Publications, 1995), 55. and another son, August, two years later.8Ibid., p.60. His son Peter, Jr., about whom we have more to say, was fourth oldest, born in 1783.

In Hagerstown, Peter and Mary opened their carriage shop on North Potomac Street, near the Reformed Church where he and his beloved wife are buried. After 84 years of service to God and country, Peter Humrickhouse went home, to be joined by his wife two short years later.

The records are unclear, but it is generally assumed that the land that came into the Humrickhouse family in Coshocton, Ohio, and on which Peter, Jr. settled, was given to Peter, Sr. by the American government, as part of a pension for his Revolutionary War service. Whether given or sold to the son, we know from the father’s will that all debts owned by the children to their father were forgiven.

Peter, Jr. headed West and, settling in Coshocton, Ohio, married Sarah Shuman. The Humrickhouses became pillars of the Presbyterian Church and, some generations later, one can still find noteworthy mention of their strong Presbyterian ties in obituary notices. Another branch of the family made their way to the Reformed Church in Shepherdstown, Virginia, the “Stonewall Brigade,” and to the bloody field of Second Manassas, but that is a story for another day.