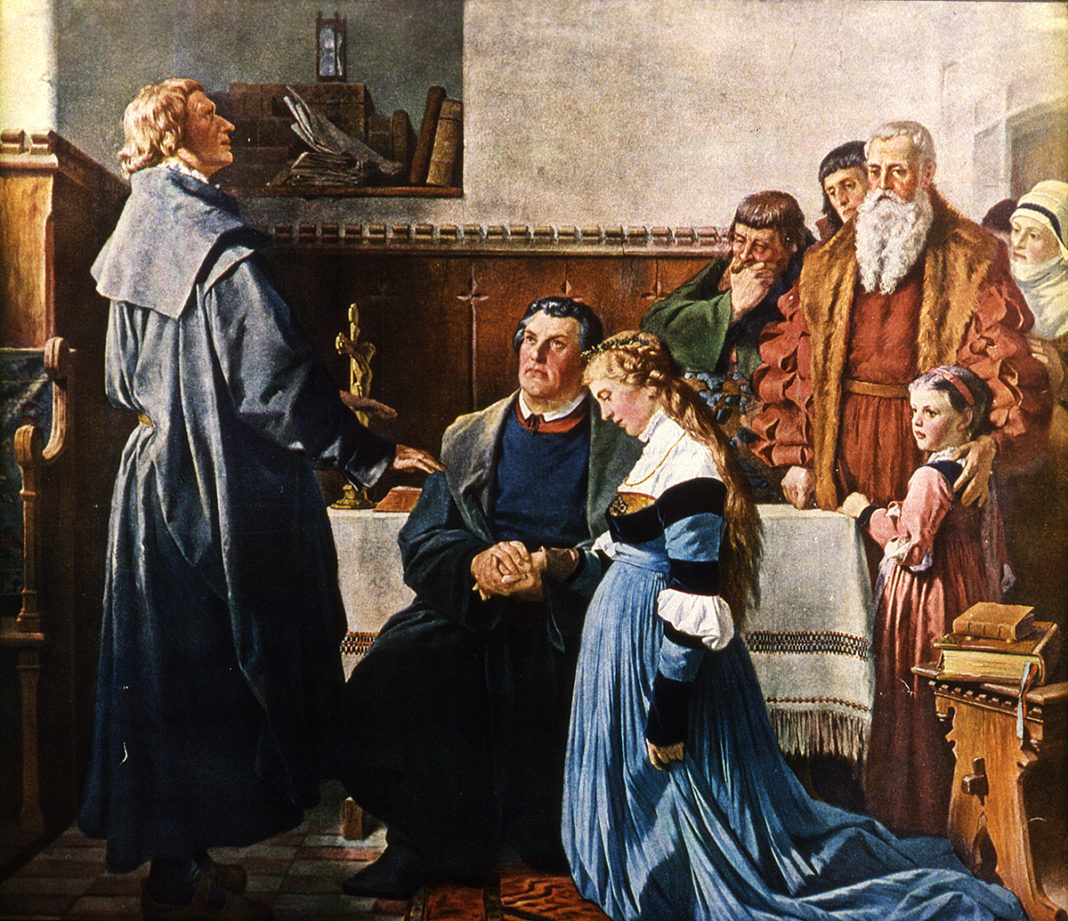 Although Martin and Katie had a joyous life together, their marriage was not without its difficulties.  They had their own struggles with good health and additionally had to suffer the pain of losing two of their six children.  Their daughter Elizabeth died before she was even a year old, and their daughter Magdalene went to be with the Lord when she was a mere fourteen.

Magdalene’s death was particularly trying for the Luthers.  Right before Magdalene died, her father fell down on his knees next to her and prayed for her, finally giving her back to the Lord if it were his will to take her.

Katharine was overcome with grief and wept bitterly, yet Luther comforted her with the peace of heaven and the hope of resurrection.  As their dear Magdalene was put into her coffin, Luther said aloud, “You, dear Lene, you will rise again, and shine like a star, yea, as the sun.  I am joyful in spirit, but I am sorrowful in the flesh.  We, dear Katharine, should not lament as those who have no hope; we have dismissed a saint, yea, a living saint for heaven.  O, that we could so die!  Such a death I would willingly accept this very hour.”

Luther’s strong faith and tender heart are so evident at this point in his life.  He served as a great comfort to his wife and as a powerful witness for the gospel as he trusted so strongly in the peace of the Lord.

Two years later, in 1544, a now sick, weakened, and somewhat discouraged Luther decided to move with his wife and children from Wittenberg back to Zolsdorf, where they had once lived before, but a matter of urgency arose which required Luther to return to Wittenberg.

Martin had been called to help settle a dispute in Eisleben, and in 1546 he went to Eisleben for the very last time.  It was in Eisleben where Luther had been born, baptized, and would eventually die.  Katherine, who was in Wittenberg at the time, was very worried and anxious for her husband to return to her, and Martin, being aware of her anxiety, sent her the following letter (among others):

“To the gracious dame Katharine Luther, my dear spouse, who is tormenting herself quite unnecessarily, grace and peace in our Lord Jesus Christ.  Dear Katharine, you should read St. John, and what the catechism says respecting the confidence we ought to have in God.  You afflict yourself just as if God were not all-powerful, and able to raise up new Doctor Martins by the dozens, should the old Doctor Martin be drowned in the Salle, or perish in any other way.  There is One who takes care of me in his own manner, better than you and all the angels could ever do.  He sits by the side of the Almighty Father.  Tranquillize yourself, then.  Amen.”

As it turns out, she was not tormenting herself entirely unnecessarily.  Not long after this, Martin Luther died, and his Katie was not able to attend to him or even hear his parting words.   Yet, she was comforted by the assurance that without a doubt her husband trusted Christ alone and had gone to be with his Father in heaven.

Martin Luther’s body was brought back to Wittenberg honorably, and thousands attended his funeral.  At his death, Luther left very little of financial benefit to his wife and children, but what he did leave, he left specifically to his wife.  He was of the strong conviction that she should not ever have to rely upon her children, but rather, they should be dependent upon her.

Many offered their condolences and promised that they would see to it that she and the children would be well provided for.  John Frederick, Elector of Saxony, made arrangements for Katie and her children to benefit from a credit fund that could be applied to the purchase of an estate, which would secure a regular income for the family.  The Counts of Mansfield and Christian III, the King of Denmark, also promised to provide her with annual financial help.  The children were able to remain with their mother and continue their education.

The support of these men was of great help, and things went considerably well for Katie in spite of her grief and sorrow, but in July of 1546, when a war erupted between the Protestants of the Schmalkald league and the Emperor Charles V, Katie found herself physically situated in the middle of a battle. As a result she was hit very hard financially by war taxes and suffered added consequences of neglect due to the distractions provided by the war.

By the end of 1547 she was only receiving a small portion of what she had once been promised.  The King of Denmark eventually stopped giving altogether, the Counts of Mansfield partially provided what they had promised, and even John Frederick was unable to give has he had once intended, due to his own hardships.

Yet even in the midst of this financial struggle, Katie took the time to write on the behalf of others who were also in need.  She wrote to the King of Denmark requesting help not for herself but for a friend, Dr. Major, instead.  She exhibited such selflessness in the midst of terrible poverty and need.  The King of Denmark heard her plea and provided for the struggling Dr. Major.

In April of 1547, Katharine and her children (along with many others favorable to the truths of the Reformation) fled Wittenberg upon the arrival of Charles V. and his army.  The unfortunate irony is that Charles V. had somehow come to respect Luther to such a degree that he demanded to see his tomb immediately upon his arrival, and he would not allow any officer to do harm to Dr. Luther’s remains.  When one of his officers asked his permission to open the grave, Charles replied, “I war not with the dead; let this place be respected.”  Because of his reaction and protection of Luther’s honor, it is believed that he would have done no harm to Luther’s widow and children.

However, they fled the city and did not return until they had received word that Wittenberg was safe again.  She did what she could to survive in spite of her poverty, but she still struggled greatly during this time.  Both Philip Melancthon (the Luthers’ close family friend, who had also been present the morning their daughter, Magdalene died) and Dr. Bugenhagen (who had preached at Luther’s funeral) plead on Katie’s behalf that she be provided with financial assistance, but both efforts came to no effect.  After several attempts, Katharine herself wrote on her own behalf:

Still, she was still met with rejection.

She was destitute, and in order to avoid starvation, she was able to borrow a small sum of money from Dr. Francis Kram, a theology professor at Leipsic, as well as pawn off part of a silver plate.  Eventually she made another plea for financial assistance from the King of Denmark, who finally provided her with much needed money.

Finally in 1552, the plague broke out in Wittenberg.  Katharine and her children decided to move to Torgau for a time to avoid the plague and to use their remaining financial resources wisely.  But on the way there, she and her children had a serious accident.  The horse carrying their wagon became frightened and ran off.  In order to save herself and her children, Katharine jumped from the wagon and was injured.  She then developed a sickness and harsh cold she could not overcome.  She lived only three months after the accident, and on December 20, 1552, Luther’s widow of seven years, died.

Katharine Luther was buried in the parish church of Torgau.

* All quotations and historical information summarized in this article was taken from Rev. James Anderson’s Ladies of the Reformation: Memoirs of Distinguished Female Characters.  W. G. Blackie and Co., Glasgow, 1856. 73-90.