Charlotte Arbaleste, who later became the wife of the celebrated Philip De Mornay, the famous French statesman, was born February, 1549. Although her mother remained a Catholic till her death, her father became a Protestant in the later years of his life. Many years before, while traveling through Germany, he came into contact with Protestantism, and at Strasburg heard a theological discussion between the Reformed and the Romanists which opened his eyes to some of the abuses of the latter. But he remained ignorant of Evangelical truth for many years, until being charged by the Romanists with being a heretic, he determined to examine into the Huguenot heresy and finally accepted it. His last words in dying, 1570, were, “Lord, thou gavest me a soul fifty-eight years ago; thou gavest it me white and clean. I render it to thee impure and polluted. Wash it in the blood of Jesus Christ, thy son.”

Charlotte was married September 28, 1567, to the Seigneur de Feuqueres, a brave and zealous Huguenot, who died of a fever about two years later. His death left her in financial straits, but the Lord raised up friends, and later she went to Paris to receive her share in her father’s inheritance. It thus happened that she was in Paris at the awful massacre of St. Bartholomew and was saved only by a providence. She says that at first she was not alarmed; but when she saw companies of soldiers, each wearing a white cross on his hat going about the street, she felt there was danger. But as there was so much danger in the streets she remained in her apartments. She then sent her maidservant and little daughter to a Catholic friend, who sent word back that Charlotte would also be welcome if she would come. She had hardly left her apartments when the soldiers burst in and were greatly angered that she could not be found. The number of refugees in this friend’s house increased to forty, but they remained until the third day, Tuesday evening. Then suspicion was aroused, the house being ordered to be searched. Warning of this having come, all escaped except Charlotte and another. She, with her maid, was put in an empty loft, while her child was sent in safety to her Catholic grandmother. Then she was hidden in the houses of several friends for three days more and finally taken to a corn merchant’s.

Her mother then tried to get her to go to mass, if only to simply save her life. But she absolutely refused. Her Reformed faith was dearer to her than her own life. At length, after being there five days she determined to leave Paris by all hazards. Her chamber there was immediately above that of a Catholic lady and she did not dare walk in her room for fear of being discovered. She did not dare light a candle lest the suspicions of the neighbors should be excited. When anything was brought her, it was only a morsel, secretly. So on Wednesday, the eleventh day of the massacre, she succeeded in getting into a boat on the Seine to go to Sens. At Tournelles a guard demanded her passport. As she had none he charged her with being a Huguenot. In despair almost, she asked to be taken to a gentleman there, with whom her grandmother who was a Catholic had had business. Two soldiers brought her to the gate. Her friends assured the soldiers that she was a good Catholic, and she was taken back to the boat and permitted to go on her journey. But she was still in the greatest danger, yet the Lord delivered her safely. For at the moment she was arrested at the boat, the house of the corn merchant where she had been was searched and she would have been killed had she been found there.

She traveled to Villegrand where for fifteen days she found an asylum in the country with a vinedresser. She then went to Sedan where she found safety, for the duke of Bouillon, its ruler, was a member of the Reformed faith. There she remained and while there she met her second husband, Philip De Mornay, one of the most devoted Huguenots, who like herself had almost miraculously escaped St. Bartholomew’s massacre. He was distinguished as a Christian, a statesman, a soldier, and an author. They were married January 3, 1576. He was sent as an ambassador to England and Holland and she traveled with him. They returned to Paris in July, 1582, and went from there to Montauban in southern France, where she lived.

While there, a peculiar case of church discipline occurred in the Reformed church. The consistory of that congregation were quite rigid about simplicity of dress, holding it to be unbecoming for Christian women to wear curls, and they prohibited it under pain of exclusion from the Lord’s Supper. They quoted 1 Timothy 2:10-11, “In like manner also that women adorn themselves in modest apparel, with shamefacedness and sobriety; not with braided hair of gold or pearls, but (which becomes women professing godliness) with good works”; and also 1 Peter 3, “Whose adorning, let it not be that outward adorning, of plaiting of the hair and of wearing of gold or of putting on of apparel, but let it be the hidden man of the heart, in that which is not corruptible, even the ornament of a meek and quiet spirit, which in the sight of God is of great price.” Charlotte and her daughters, not obeying this injunction of the consistory, were prohibited from coming to the Lord’s Supper by the consistory.

De Mornay, her husband, severely reprimanded the consistory, but it was all in vain. She replied to the consistory saying that the Reformed church nowhere else acted in this manner, and that 1 Timothy 2:9, as Calvin showed in his commentary, referred more to the reformation of manners than to dress. She finally appealed from the consistory to the General Synod of the Reformed Church of France. We are not informed how the matter was finally adjusted there, but part of her family began attending the Lord’s Supper in a neighboring Reformed congregation, and she in 1589 removed to Saumur. There, when her husband returned, being relieved of active service by the king, he found her building at her own expense a church for the Reformed congregation. This was dedicated a few days after his return. 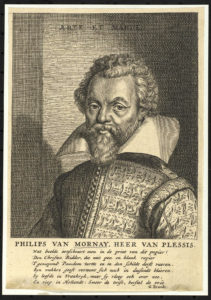 Philips of Mornay, Lord of Plessis

What portrait can one see in the print of this paper! The Christian Knight, who with pen and exposed rapier Challenged the armed papacy and dared to go against its shield. His keen spirit shows itself in a thousand pages. It lived in France, but it also flew over the ocean, And exclaimed in Holland: Suppress the quarrels, restore the peace. Poet G. Brandt Translation courtesy of Nico Bouwkamp

Her heart seemed bound up in the life of her only son Philip, to whom, when he was in Holland, she wrote a most beautiful motherly letter: “My son, God is my witness that even before your birth, He inspired me with a hope that you would serve Him; and this to you ought to be some pledge of His grace and an admonition to perform your duty. Your father and I have also taken care to instruct you in every branch of useful learning, to the end that you may not only live, but also shine in His church. You are young, my son, and divers imaginations present themselves to youth, but always remember the saying of the Psalmist, ‘How shall a young man direct his way? Certainly by conducting himself according to thy word, O Lord.’ Nor will there be wanting persons who will desire to turn you aside from to the left hand or the right. But say also with the Psalmist, ‘I will associate only with those that keep thy laws. Thy laws, O God, shall be the men of my counsel.'”

Beautiful words, and nobly he fulfilled them, for he grew up a beautiful Christian character in answer to such prayers and admonitions. His death in battle in 1605, while fighting for the Dutch, almost broke her heart. She never recovered from the shock, and survived him only a few months. On Sunday, May 7th, 1606, she attended morning service at the church and expected to go in the afternoon to catechizing, but she became ill. She endured great suffering until the following Sunday, when her husband broke the news to her that she must die. She received the news with joy. She bore her dying testimony, saying, “I am going to God, persuaded that nothing can separate me from His love. I know that my Redeemer liveth. He has triumphed.” One of her physicians, a Catholic, exhorted her to take courage. She replied, “My courage is from above.” She then spoke to him of the superior consolation that the Protestant religion offered over the Catholic, and urged him to look to Christ and him crucified. The next day her pastor recalled to her Christ’s words, “Father, into thy hand I commend my spirit.” She added the additional words of the 31st Psalm, “For thou hast redeemed me, O eternal God of truth.” She expired with the word “Jesus” on her lips, May 15, 1606. Her husband bore a beautiful tribute to her memory when he said of her, “She assisted me to live well, and by her pious death, she has taught me how to die well.”