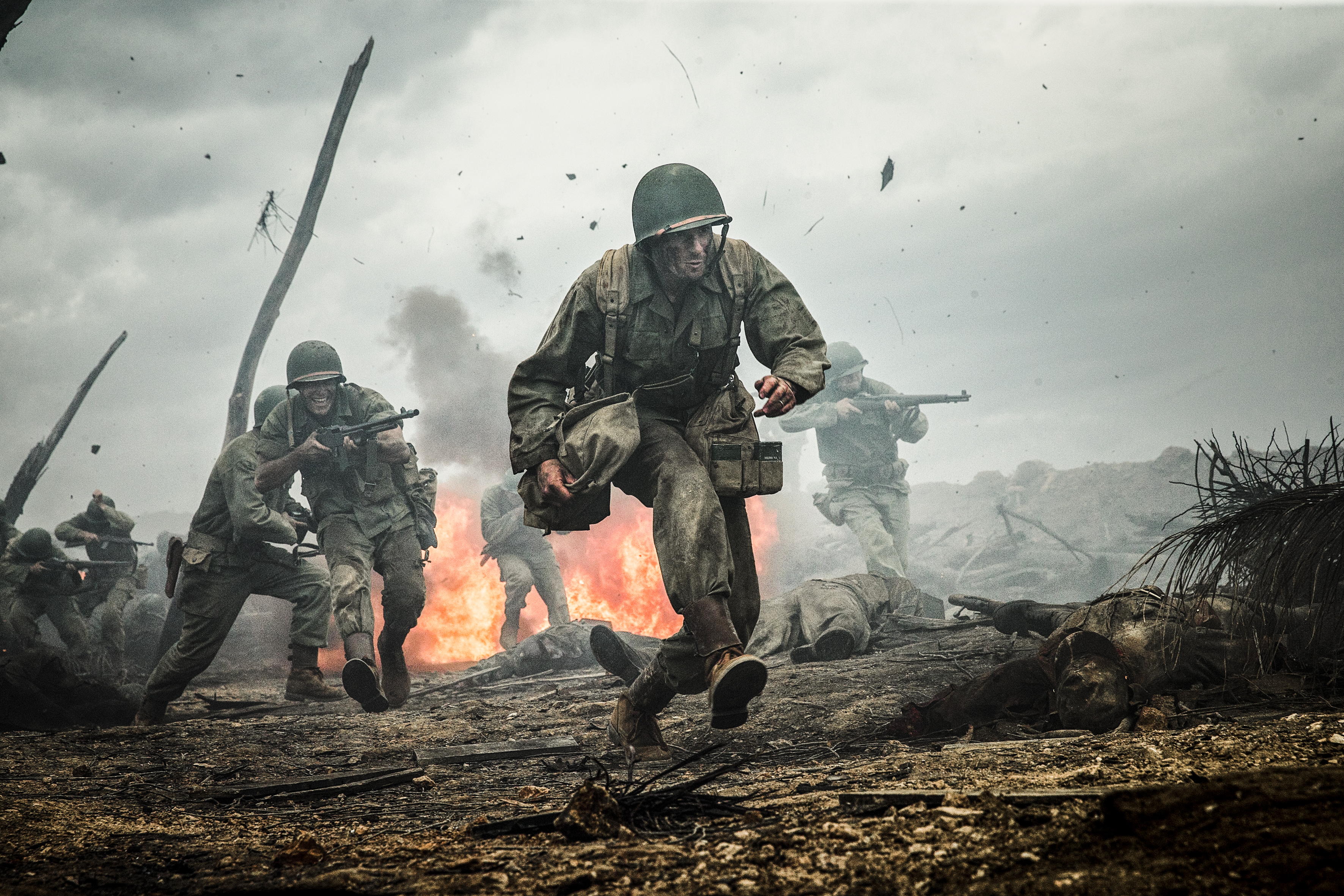 Desmond Doss was born in Lynchburg, VA, just down the road from my hometown of Roanoke. The Shenandoah Valley was full of Schwarzenau Brethren, Old Order German Baptists and other Pietist groups that stretched down from Ephrata and the German settlements of Pennsylvania. It wasn’t hard to come by pacifist leanings in such a place and time, and so Desmond, a devout Seventh Day Adventist, went to war as a non-combatant medic. His heroics under fire earned him the Congressional Medal of Honor and are chronicled in Mel Gibson’s recent film “Hacksaw Ridge”.
He was not, however, the first non-combatant to be honored with the nation’s highest military medal. That distinction belongs to a Baptist preacher from Wayne County, Indiana. He was 39 years of age and had been in the active preaching ministry since his ordination at age 21 when he enlisted in the Union army during the American Civil War. His bigger than life story captured the imagination of the Chicago Tribune a few years ago:

“The noblest military hero in Northwest Indiana history never killed an enemy. Nor fired a gun in anger. Nor expressed outrage at enemies who sought to consume his nation.

“He was not even a soldier. Not really.

“But as we stand to honor America’s military veterans this week, John Milton Whitehead deserves his seat with heroes as much as any man or woman who ever breathed. He’s one of five Northwest Indiana veterans given the nation’s highest military salute, the Medal of Honor.
“He stands unique even among the uniquely courageous. Whitehead not only served America, he served his God too. He bore the sublime burdens and horrors of war with dignity and became famous for a resolute but gentle heart. If there is a model for humanness amid war’s inhumanity, Whitehead’s life endures as a beacon.

“The United States has bestowed the Medal of Honor on nine chaplains. One was Whitehead, ‘The Angel of Stones River.’ Whitehead was 39 when he and his Westville neighbors enlisted in the 15th Indiana Volunteer Infantry Regiment. He’d been a committed soul-saving preacher since his Baptist ordination at age 21.

“Gen. William Rosecrans’ Union Army of the Cumberland eventually encountered the Confederates at wet, frigid Stones River ford near Murfreesboro, Tenn. It was the week after Christmas in 1862. The place is wooded, subdued and idyllic now. Leaves flutter to earth as November breezes caress the water.

“Before four days ended, the Union prevailed, but the battle had consumed 1,730 Union lives and 1,294 Confederates. Nearly 16,000 more were wounded. It was as bloody and awful a soul-rending carnage as humans have ever inflicted on one another.

“The Rev. Whitehead stood at the side of his friends for four days, and carried hundreds to safety after they were wounded. Hour after hour. He carried many who died in his arms. All the while, musket balls and cannon shrapnel sizzled around him like angry wasps. He stood unflinching and unarmed with friends who literally were cut to pieces by artillery.

“‘Our regiment was ordered to hold our position on the left, nearest to the river, at all hazards,’ he wrote after the war. ‘Three times we charged (Brigadier John K.) Jackson’s Brigade and three times we put the enemy to flight … But this was accomplished only with a fearful loss of life. Of my own regiment every other man was killed or wounded; that is, half were gone …. Though a noncombatant, I was with my regiment during the entire affair, comforting the dying, carrying off the injured, caring for them and praying. …

“‘During the struggle, Capt. Robert J. Templeton fell fatally wounded. I carried him to the rear and remained at his side until he breathed his last. I copied his last message and sent it to his friends at home. My own next-door neighbor from Westville … Capt. James N. Foster, dropped mortally wounded into my arms, the same ball killing two other brave soldiers. …John Long, a private, had one leg shot to pieces. He cut the dangling limb off with his own pocketknife and hobbled off using his gun for a crutch, until I took him up and carried him to the rear.

“‘Calvin Zenner of Company G received a fatal wound. I carried him back. A number of soldiers gathered around their expiring comrade as I offered a prayer for him, and they sang, ‘O Sing to Me of Heaven’ … He soon closed his eyes and ceased to breathe. After nightfall, when both armies were quiet along the front lines, I helped to bring the wounded to the general hospital, carrying those who could not walk on my shoulders to the ambulance.’

“He comforted Confederates as well his friends. He wrapped bandages and knelt beside them as they died. He whispered words of comfort and promises from a loving God as the last sounds they would ever hear. And at the end of that terrible week, he was drenched in his friends’ dried blood and so profoundly sad that his soul wept. But he was never angry.

“When that terrible war ended, he went west and found comfort with a Baptist flock in Topeka, Kan. Whitehead died at peace there in 1909.1Chicago Tribune, November 11, 2015.

The following extract from a letter written September 9, 1898, by John M. Hunt of Oakland, Oregon, to his cousin, Mrs. M. L. Barber, of Burlington, Kansas, refers to the Rolling Prairie Baptist church of which Mr. Whitehead was once one of the pastors:

“There is one plain picture now before me that often presents itself, and that is where we were often at church. Your uncle Milton [Rev. J. M. Whitehead] and brother Thomas [Rev. Thomas  Hunt] in the pulpit of the old church, your uncle Jasper and deacon Betteys just in front, and just behind, on the next seat, uncle John Hefner, brother William and uncle David Stoner, and a few others. Then your uncle Newton and Alfred Salisbury and several more male singers rise and join in singing old Coronation; and as they sing I see your grandmother and Mrs. Betteys and your aunt Polly and many others all drinking in the music, while the seats on each side are full; but some of the faces are almost faded out, while many others are very distinct yet. Shall we meet again? Yes, in the great beyond we shall meet again. Those who have loved the Lord and tried to do his will, as they understood the Word, will surely join in singing that new song that the revelator speaks of, whether they were members of our church or not,; or, may be, not members of any church. Surely, a blissful hope? And quite surely with no Baptist church building in Northern Indiana are more rich and pleasant associations connected, than with that old frame building and its large, box-like pulpit of Rolling Prairie. Such men as have preached from that pulpit are not readily found now. The revival there in mid-summer of 1839, Elder A. Hastings in the prime of his manhood, pastor, was one to be through life remembered. And the ordination there, February 27, 1946, of T. L. Hunt, Stephen G. Hunt and J. Milton Whitehead, was one of the memorable occasions. ‘For nearly five years, these three young brethren supplied the pulpit of the Rolling Prairie church, preached in the neighborhoods around, and kept up for a time six Sabbath Schools’….”

The author then quotes from a summary of Whitehead’s labors printed in the Central Baptist.

“He has been in the ministry over sixty-three years, forty years as pastor, twenty-one as evangelist, and two as chaplain of the Fifteenth Indiana Volunteers, and by congress was voted a medal for gallantry in the battle of Stone River. He held many meetings of great power, ten of them of special note. In each of the ten over one hundred united with the Baptist church, in two over two hundred so united. In one of these two, he baptized one hundred and sixty-three. Of these, eighty-eight were husbands with their wives, forty-seven were young men and forty-six were young women. In that number were nine entire households, each numbering from two to seven persons. He has assisted in dedicating one hundred and forty-six meeting houses. While pastor in Kankakee, Illinois, a house costing $20,000 was built and he raised $16,600 on the day of dedication. He assisted in dedicating the house at Battle Creek, Michigan, and raised on that day $19,500.”2E.D. Daniels, A Twentieth Century History and Biographical Record of La Porte County, Indiana (Chicago: Lewis Publishing Company, 1904) 268-9.

Many of us attend churches with fewer members than were added in a single day to the local church where this man happened to preach. Some of us belong to denominations with fewer church buildings than this one man helped to dedicate. Raising $16,600 or $19,500 in a single day for a church building fund today is something few pastors have done. But imagine if they raised those sums with the value of a dollar in the 1890s.

Some will also read these words with a critical eye, as though the failure to criticize is an endorsement of another’s differences (“He was a Baptist.” “There is no office of evangelist today.” “Why is there so much emphasis on numbers?” etc.). Perhaps, we would all be better served to contemplate how we might learn from this man’s zeal and faithfulness.

John Wesley and George Whitfield were co-laborers in the mission fields, and close colleagues, but over time they grew apart over doctrinal differences. This prompted one person to ask Whitfield if he expected to see John Wesley in heaven.
“No,” was his reply, but before his questioner could add his censorious agreement, Whitfield caught him up short with these words.
“John Wesley will be so close to the Throne of Glory, and I will be so far away, I will hardly get a glimpse of him.”

View the trailer for Hacksaw Ridge: