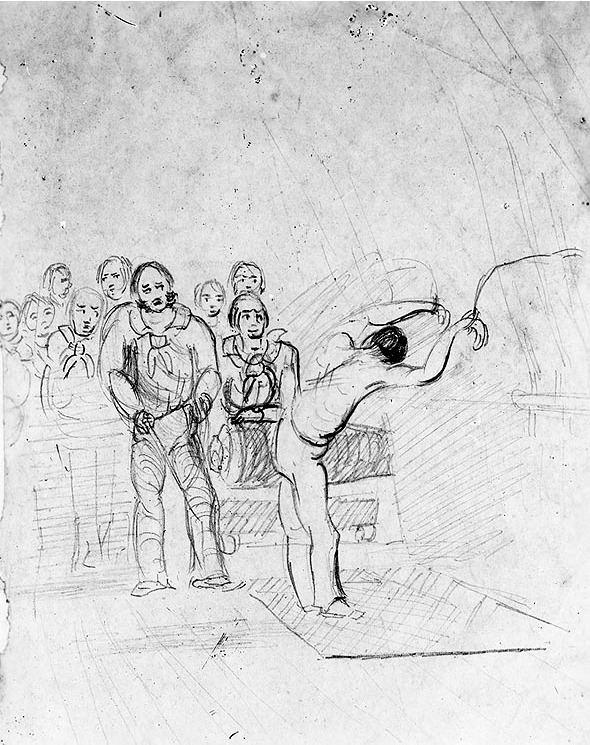 Few survived the slave galleys, and fewer still had occasion to record their experiences, yet one remarkable volume survives, that was written by a French Huguenot, imprisoned and sentenced for his faith. The manuscript came to the attention of English playwright Oliver Goldsmith who undertook to translate the volume for publication. Of that first printing, 500 copies were sent to the United States for distribution, one of which is housed in the City Seminary archives. Another is housed at the University of Wisconsin and has been included in the Google digital library project currently underway. What follows are excerpts from Jean Marteilhe’s first-person account of his experiences.

January, 1702, Mr Lambertie again came to inform us, that a Company of Galley slaves were to set out the next Day; that he could exempt us from going, but he thought proper to apprize us, that this was the last Company of Slaves that would be sent to Dunkirk, for the future, all others were to be transmitted to Marseilles. This, continued he, is a Journey of above three hundred leagues, to be performed on Foot, and with Chains about your Necks. He added, that he should be obliged to go into the Country in the Month of March; and that it would be no longer in his Power to be of Service to us. He was of Opinion, that we ought to take the present Opportunity, as the whole of our Journey would be under his Direction. We should be distinguished from the rest of the Slaves, by being carried in a Wagon the whole Way, which was about twelve Leagues. In short, his Reasons seemed so convincing, that we came into his Opinion. 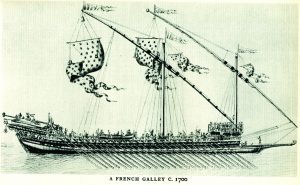 We now prepared for our Departure, and accordingly the following Day, instead of being tied to the rest of the Slaves who walked on Foot, we were accommodated with a Wagon. During our Journey we every Evening supped with the Exempt who guarded us; and when it was thought proper to retire, we had a good Bed to lie on. In short, we were treated with such Marks of Distinction, that at Tpresy Furnes and the other Towns through which we passed, we were looked upon as Persons of some Rank. But, alas! our Happiness was but of short Continuance; for in three Days we arrived at Dunkirk where we were put aboard the Heureuse Galley, commanded by Commodore de la Pailleterie who had the Direction of the six Galleys in this Port. We were each assigned a separate Bench, by which Means I was parted from my dear Companion. Yet still could I have been happy, having nothing but Labour to aggravate my Misfortunes. I could have found some Comfort though chained to the Oar for Life; had we not been subject to the capricious Insolence of a Parcel of petty Tyrants, who decided without Examination, and punished without Pity. 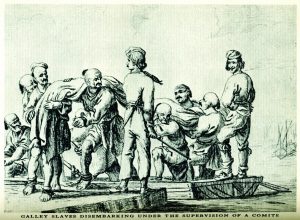 The very Day of my Arrival, the Bastonado was given to an unhappy Slave for some trivial Fault. His Defense was scarce heard, and his Punishment was inflicted with the most unrelenting Barbarity. My Blood ran cold when I observed his Anguish; but conceive my Terrors, when a little after I was going to be treated myself in the very same Manner. A Slave, who had been condemned to the Gallies for Robbery, came on my first Arrival to demand the entrance fee. I replied, that if I intended to be liberal to any, it should be to such only as had not his Assurance: For I had already given four more Bottles of Wine among the Slaves on the same Bench with myself. Enraged at my Refusal, he loaded me with all the Invective his Fury could suggest; to which I made no Reply. Not content with this, he informed the Sous Comite, whose Employment is to keep the Galley ShipSlaves to their Work and to punish their Negligence or Crimes, that I had uttered the most horrid Blasphemies against the Holy Virgin, and all the Saints of Paradise. The Sous Comite, who was a Wretch divested of every Principle of Humanity, as those of his Station generally are, gave Credit to the Slave’s Information. He came to my Bench, commanded me to strip, and prepare for receiving the Bastonado. Surprized and terrified, particularly as not knowing how I came to incur so dreadful a Punishment, for I was ignorant of the Information against me which was false and groundless to the last Degree, I asked him what I had committed to be treated in that Manner, and begged the Slaves who sat on the same Bench to inform me whether it was the Custom to treat all new Comers thus. My Companions, as much surprised as I, knew not what to answer. In the mean Time the Sous Comite went to make a Report of the Affair to the Major of the Galley, who was always to be present on such Occasions. As he wasSlaves Disembark going to the Quay, where the Major was at that Time walking, he happened to meet the Comite (an Officer superior to the Sous Comite) to whom he told the Affair. The Comite asked whether he had himself heard me blaspheme, to which he replied in the negative; but that the Information came from Poulet, the Galley Slave. A fine Informer, truly, replied the Comite (who for one of his Profession was a good Sort of a Man;) I’ll examine him myself. He accordingly came to my Bench, and demanded how I came to have the Insolence to blaspheme the Catholic Faith? I replied that he must have been misinformed, and that even my Religion forbade my insulting that of others. Upon this, Poulet was called and examined, touching his former Evidence. He repeated with the most steadfast Assurance what he had already told the Sous Comite, who was also present on this Occasion. As the single Testimony of Poulet was not thought satisfactory, the Slaves who were chained to the same Bench with me, were ordered to give their Testimony; after which those of the Benches next us were examined. The whole Number, consisting of nineteen or twenty Persons, concurred in the same Evidence, that I had not uttered the least Word derogatory to the Holy Virgin, or the Catholic Religion; that the only Answer I made Poulet to all his Reproaches was, that I would give no Entrance Money to Fellows of so much Assurance. In short, the Informer was flogged heartily by the Comite, chained with a double Chain to his Seat, and the Sous Comite was severely reprimanded for being so ready to listen to the information of so noted a Liar. I was thus freed from the Apprehensions of the Bastonado; and the Reader may judge from the following Description of it, whether I had not Ship SectionsReason to dread so severe a Punishment, The Criminal is stript from the Waist upward. He is extended with his Face downward, his Arms upon one Bench, and his Legs upon the Opposite, which are held by two Slaves that stand opposite each other. The Executioner, who is generally a Turkish Slave, stands over him with a Rope in his Hand, with which he is to beat the Criminal without the least Mercy ; for if he happens to be remiss, which is seldom the Case, the Sous Comite uses him as he should have used the Criminal. Thus then every Stroke is laid on with the Executioner’s whole Force, so that each Blow raises a Wheal as thick as one’s Thumb. Few that are condemned to suffer this Punishment, can sustain above ten or twelve Blows without fainting. This, however, does not prevent the Executioner from proceeding. He continues to lay on the miserable and seemingly lifeless Carcase, till the Number of Blows ordered by the Major are Completed. Twenty or thirty are generally inflicted for slight Offences. I have seen fifty, eighty, even an hundred ordered; but then those who are thus punished seldom recover. When the allotted Number of Stripes are given, the Surgeon Barber of the Galley rubs the Criminal’s Back with Salt and Vinegar; which, though it may prevent a Gangrene, yet renews all the Poignancy of his former Anguish.

Such then is the Punishment for Galley Slaves: from this neither Family, Virtue, nor Diligence can secure the unhappy Convict; for if Caprice directs, the Punishment is no sooner ordered than inflicted. 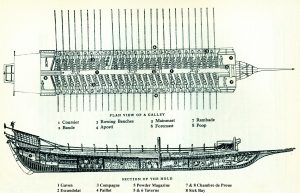