It was June 26, 1702. After thirty-six hours labor, Monica Doddridge gave birth to her twentieth child. It was obviously stillborn and Monica’s hopes were dashed. Eighteen of her children had already died in infancy and she had so wished to have a brother for her only surviving child Elizabeth. The midwife picked up the pale corpse to put it out of sight of the sorrowing mother. Suddenly her heart fluttered. Had she not seen a slight movement in the breast of the tiny boy? She began to slap the infant in an effort to wake him to life, and, sure enough, soon the tiny baby gave out a large cry as if he had the lungs of a robust healthy child.

Such was the nigh tragic birth of Philip Doddridge, son of oil merchant Daniel Doddridge, who, rather than walk in his father’s footsteps, was to combine the professions and callings of both his grandfathers. John Doddridge was a well-to-do minister of the Established Church who found himself without a parish as a result of the 1662 Act of Uniformity. He subsequently became pastor of a Dissenting church in Twickenham where he gained a reputation for being “an ingenious man and a scholar; an acceptable preacher, and a very peaceable divine.” John died in 1689, so did not live to see his illustrious grandson. Philip’s maternal grandfather John Bauman was a Hussite Protestant of great academic ability and qualifications who had to flee from Bohemia in disguise, hunted by the Roman Catholic forces who had ejected Frederick the Protestant Elector. He eventually arrived in England via Germany, accompanied by his leather-bound Luther Bible, which became the treasured possession of his grandson. Bauman founded a grammar school at Kingston-upon-Thames and died in 1668, leaving behind his teenaged daughter Monica.

The Doddridges provided a private tutor for Philip but the lessons he remembered best were those taught by his mother. The large fireplace in the sitting-room was framed with Delft tiles illustrating the history of the Bible. Monica would sit Philip on her knee and go through the Lord’s dealings with His people tile by tile so that her son might grow up to understand the ways of God with man.

Monica died when Philip was eight years old. He was then put under the care of Daniel Mayo of Kingston, an ejected, now Dissenting, minister who also ran a private school. Mayo brought Philip to an understanding of the Gospel besides providing him with an excellent education. In 1715 Daniel Doddridge died, leaving Philip an orphan. A work of God, however, had begun in his life and the young boy could write in his diary that though he had lost his earthly parents, “God is an immortal Father, my soul rejoices in Him; He hath hitherto helped me and provided for me; may it be my study to approve myself a more affectionate, grateful, and dutiful child.”

Philip then came under the guidance of Samuel Clark, who helped him come to some assurance of saving faith before he was sixteen years of age. Philip’s guardian (his father’s former business partner) declared himself bankrupt and young Philip had to sell the last of his family heirlooms, with the exception of his grandfather’s German Bible, to save him from the debtor’s prison.

Philip was destitute but his sister Elizabeth, now married to a clergyman, offered him a home. He felt called to the ministry but all opportunity of finishing his education had gone. The Duchess of Bedford decided to finance his entire education providing he would promise to become an Anglican clergyman, but Doddridge was set on becoming a Dissenting minister. Samuel Clark came to the rescue and offered to finance Doddridge’s studies, obtaining for him a place at a Dissenting college at Kibworth, Leicestershire, run by John Jennings.

Doddridge now resolved to live for God alone and worked hard to progress spiritually and academically. He made it a point to study no book more diligently than the Scriptures but his wide reading was still enormous by any standards, and he never seemed to waste a minute of prayerful study, even praying while getting washed and dressed. Such a testimony to a godly life was probably the reason why Jennings, who usually forbade his students to preach outside the college, made an exception in Doddridge’s case. Shortly after Doddridge graduated, John Jennings died and his church called Doddridge to the pastorate on a salary of $60 a year.

Jennings’s academy closed down for a time but in April 1729 Isaac Watts and several other ministers met at Lutterworth for a day of fasting and prayer and felt moved to invite Doddridge to reopen the academy in Market Harborough. Soon after the reopening, Doddridge was put under great pressure by parents, students, local politicians and the Castle Hill church to move his work to Northampton. This step was eventually taken in January, 1730 when Doddridge set up his academy in Marefair, Northampton, becoming at the same time pastor of the Castle Hill church. Doddridge was still only twenty-seven years of age and about to be married to Mercy Maris who was twenty-two.

It was not long before Doddridge’s academy became quite famous and even Church of England ministers sent their sons there rather than have their morals corrupted at the universities. At first the students complained that, though their tutor’s lectures were excellently organized, his sermons were quite chaotic, so Doddridge began to take great care with his preaching. Soon, the students were rejoicing because Doddridge’s sermons touched their hearts and pointed them to God. He had determined to “preach experimentally man’s fall, sin, and misery; the necessity of regeneration; the imputation of Christ’s righteousness; the necessity of holiness, as the evidence of acceptance before God; and the absolute need of the Holy Spirit to begin and carry on a saving change in heart and life.”

Doddridge’s students were even more influenced by the prayers of their tutor than his sermons. He could spend up to five hours in his own private prayers and when praying in public, he had an extraordinary gift of echoing the thoughts and longings of his fellow-worshippers so that they inwardly prayed with him when he acted as their spokesman before God.castle-hill-church-west-fac

Many of his church members came from far-off villages, so Doddridge, assisted by his students and church elders, took the gospel to them regularly and introduced daily family worship among them. The elders’ major duty was to catechize members at their homes and distribute Christian literature such as Doddridge’s Family Expositor and his famous The Rise and Progress of Religion in the Soul. The elders also helped in church discipline when drunkenness, bankruptcy, and quarreling among members’ families marred fellowship in the church. 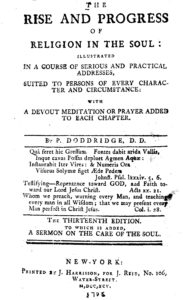 Doddridge’s theology can be compared with that of his contemporary, John Gill, whom most scholars believe was a very “high” Calvinist. Doddridge was certainly far “higher” than Gill in his doctrine of election and reprobation but disagreed with Gill on eternal justification, modifying Gill’s view somewhat. He agreed fully, however, with Gill concerning the scope of the atonement as being limited savingly to the elect and that Christ’s death nevertheless provides, indirectly, some non-saving, universal benefits.

wattsDoddridge was freer in his comments on Calvin than most Calvinists, telling his students, “Calvin has a multitude of judicious thoughts; but they are generally intermingled with a great many that are little to the purpose.” This criticism has hurt many Calvinistic commentators who feel that their hero has thus been removed from his pedestal. They retaliate unfairly by pointing out that Doddridge’s theology must have been shaky as a number of his pupils turned liberal. Doddridge maintained an open college and several charity schools for anyone seeking a general education, so he can hardly be blamed if some of those under his care did not honor the Gospel. The truth is that anyone looking for metaphysical speculations, theological systems, and philosophical applications in Doddridge’s works will be utterly disappointed. Those who wish for a deeper interest in Christ and are prepared to accept an evangelical and experimental exposition of the good “old-time religion” cannot do better than read Doddridge’s works.

Dissenters such as Isaac Watts criticized Doddridge for supporting George Whitefield and exchanging pulpits with him. He was also criticized for his close friendship with Anglican James Hervey and for his practice of open communion with Baptists. Whatever Doddridge did or said was interpreted by the hyper-orthodox as liberal and by the liberal as ultra-conservative. Doddridge simply maintained that revival of religion was the task of the Holy Spirit within the work of the universal church, in which true Christians, whatever their denominations, should work together. This is perhaps why Doddridge’s works are still popular throughout the denominations and have been translated into so many different languages, including Tamil and Syriac. In fact, during the eighteenth and nineteenth centuries no works were translated as often as Doddridge’s. They had a worldwide, inter-church appeal.

Doddridge was never in good health and was always so thin that he could best be described as “a bag of bones.” Yet he was often compared to a hare, always running hither and thither for the Lord. By the time he was forty-eight years of age, he was a worn-out man. In 1751, he knew that the Lord was calling him home and began to prepare his church and college for the event. Friends from all denominations rallied around the dying saint and some $900 was raised, mainly by Anglicans and the Countess of Huntingdon Connexion, to send Doddridge to Lisbon for a change of air. Benjamin Forfitt had wished Doddridge, “When the solemn hour comes, may you enter into the port of bliss like a gallant ship laden with the spoils of victory.” On the sea journey, which was to be his last, Doddridge confessed, “Such transporting views of the heavenly world is my Father now indulging me with, no words can express.”Leben_Lord-of-the-Sabbath

On arriving at Lisbon, Doddridge was met by cold, rainy, windy weather exactly like the weather he had fled from in England. Doddridge, full of joy, knew that the climes of eternal Canaan were beckoning him and told his loving wife, “So sure am I that God will be with you and comfort you, that I think my death will be a greater blessing to you, than ever my life had been.” Doddridge passed over Jordan on October 26, 1751. The Northampton Mercury recorded that “his Piety was without Disguise, his Love without Jealousy, his Benevolence without Bounds. He had no Equal.”

Reprinted by permission from The Banner of Sovereign Grace Truth, vol. 6 no. 7, September 1998. Part of the Fire and Ice Sermon Series: http://www.puritansermons.com