H. Kurzenknabe, music teacher and author, was born in Moenchehof, near Curhessen, Germany, June 18, 1840, (the son of) John George and Anna Kurzenknabe. He was left an orphan in childhood. He attended the Industrial School at Cassel. When he was fourteen years old he bade farewell to friends and home, September 15, 1854, and set out to seek his fortune in the New World, sailing from Bremerhaven for America on the following day. By mistake he was transferred to a ship on which all were strangers to him, but he was buoyant with hope and free as a bird. During the voyage of forty-nine days, being a very clever violinist, he made friends among the officers and crew and became also a general favorite with the passengers, so that he was the pet of the ship. His especial attention was attracted to an old lady who was sick during the whole voyage. Her children in America had sent money to bring over their old mother. To this helpless woman he ministered in his boyish way as best he could. The forty-nine days’ voyage was tempestuous, and minus mast, and storm-beaten, the ship hove in sight of the eagerly looked-for land. On her arrival at New York, the children of the old lady were there to meet her, to whom she told the story of the boy’s kindness. In this family he found a temporary home, and in years to come he was not forgotten by them. Arrangements were made for him to go to a seminary in Pennsylvania, where under Christian training he found a safe shelter and valuable instruction. Having a talent for music he followed this bent, and in that institution of learning he prosecuted his musical studies and made for himself a name as a teacher of the violin and vocal music. After teaching successfully in Baltimore and other Maryland towns, he visited the New England States and taught conventions in a number of important cities. He then returned to Hagerstown, Md., where his lot fell in pleasant places, and here, too, he found the wife to cheer him through his busy life. Repeated and urgent invitations from Maryland friends to make a change, (for their ill son’s sake), induced the Kurzenknabes to disregard the threatening perils of war and journey southward. Antietam and Gettysburg brought the armies of both sides, and the great invasion left the family destitute and helpless, with but five dollars in money and a railroad ticket to Sunbury, Pa., whence the floods drove them back. Teaching for twenty-seven years in many different States, sometimes hundreds of miles from home, always joyous, looking at the bright side of life, active, with plenty of grit, yet with his heart centered where the loved ones stay, earnest, enthusiastic, this is J. H. Kurzenknabe as his friends and scholars know him. 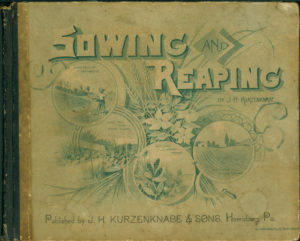 Professor Kurzenknabe is the author and compiler of the following books: “Sweet Silver Echoes,” “Music at Sight,” “Gospel Trio,” “Songs and Glees,” “Wreath of Gems,” “Song Treasury,” “Peerless Praise,” “Gates Ajar,” “Sowing and Reaping,” “Theory of Music,” “Fair as the Morning,” and “Kindly Light.” The sale of “Sowing and Reaping” has reached over 280,000 copies, and over 190,000 copies of “Fair as the Morning” have been sold. “Kindly Light” starts in with 20,000 copies engaged in advance of publication. All of these books are published by his well-known house of J. H. Kurzenknabe & Sons— Harrisburg, Pa…. Professor Kurzenknabe is at present a member of Salem Reformed Church, which, as elder, he represented for many years at Classis and in the Synod.

Copyright (c) 2000 — All Rights Reserved: Use, duplication or reproduction for profit or presentation by any person or organization is strictly prohibited.