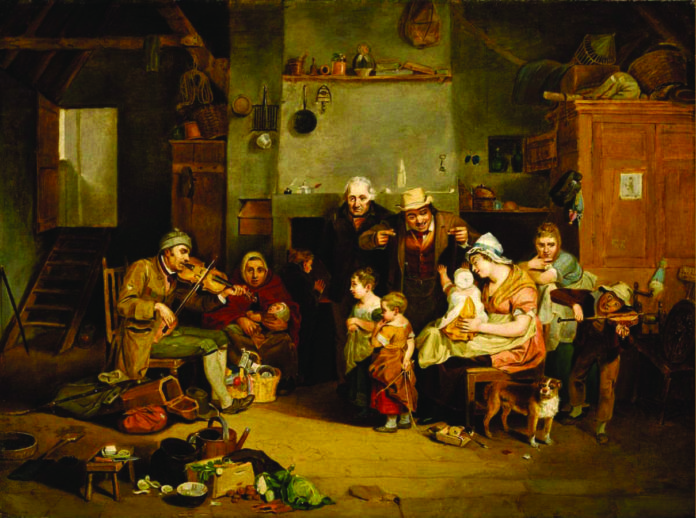 In the following excerpt, written on the eve of World War I, we read an earnest description of early German settlers, mostly Lutheran, Reformed and Mennonite. Written in 1916, on the eve of World War I, it was surely penned in hopes of deflecting animosity toward their American progeny. While the picture painted is touching and quaint, in the end, it was the willingness of a generation of young men laid to rest beneath the fields of Flanders that proved they were, after all, just like their neighbors. While the author’s goals may have had a more immediate purpose, we are indebted to him for capturing a moment in time that informs us about how this one ingredient in the American “melting pot” came to view their identity as Americans.

A Tribute to the memory of the men and women, who worked, fought and died for the welfare of this country; and a recognition of the living who with equal enterprise, genius and patriotism helped in the making of our United States.

To take a glimpse at the life of the early pioneers in America is certainly interesting. It will be remembered that the British government purposely placed many of these Germans at the most exposed parts of the ‘frontier,’ where their settlements would serve as outposts and as protection against the French and their Indian allies. In this way the Germans in the valleys of the Mohawk, of the Susquehanna, Shenandoah and Wyoming and at the Blue Mountains form-ed the vanguard of civilization.

For their own safety’s sake these settlers were compelled to place their log houses close together, so that in case of danger they could be better protected. The intervals betweenthe houses were closed with palisades, ten or twelve feet high. Sometimes these rude fortresses were surrounded by deep ditches. In the center of the village stood a very strong blockhouse, which served as a place of refuge in case of extreme danger. It had mostly two or three stories, the upper projecting over the lower. The heavy walls were pierced by numerous loop-holes. In greatly exposed villages there were three or four such strongholds at the corners of the village, so that the gunfire of the defenders could sweep in every direction.

The ever present danger compelled the settlers to keep constant guard. Every man was obliged to perform sentinel duty at times. As soon as the scouts noticed any danger they gave signals, the meaning of which was understood by all. In case of siege, all men and boys had to hurry to their respective posts at the stockade. The women assisted in loading guns, in casting bullets, in providing the men with food and water, in taking care of the wounded, besides looking after the children and cattle.

As the very existence of the whole settlement de-pended upon preparedness, it was every

man’s duty to keep his arms and ammunition in perfect condition and ready to be used at a moment’s notice. Skill in the use of weapons was highly valued and encouraged. Even small boys were allowed to carry guns and hunting-knives. Bows and arrows and tomahawks they handled with an Indian’s dexterity. Racing, jumping, swimming, climbing, wrestling and all other physical exercises, the knowledge of which could be helpful in the hard struggle for existence, were en-couraged. Challenges for shooting and fighting-matches were frequently ex-changed between neighboring settlements, and when these contests were fought out, enthusiastic spectators were never wanting.

As the population of Germany during the 17th and 16th centuries supported itself mainly by agriculture, naturally the majority of German emigrants consisted of farmers. Of their splendid qualities the accounts of many travelers and statesmen bear testimony. When the famous French botanist Andre Michaux visited North America, he was surprised at the condition of the German farms. In mentioning them he says:

“The superior culture of the Belds and the better condition of the fences indicate that here are settlements of Germans. Everything breathes comfort and well-being, the reward of diligence and intelligent work. These Germans live under much better conditions than the American descendants of the English, Scotch and Irish; they are not so much given to strong drink and have not that restless spirit, which frequently in-duces settlers of other nationality to move, for the most trifling reasons, to distances of perhaps hundreds of miles in search of more fertile land.”

In still more enthusiastic terms Dr. Benjamin Rush, Surgeon General at the time of the Revolution, spoke after passing through all the colonies. In 1789 he published “An Account of the Manners of the German Inhabitants of Pennsylvania.” In this classic little essay Rush, who has justly been called the Tacitus of the German Americans, enumerates the particulars, in which the German farmers differed from most of the others.

“In settling a tract of land they always provide large and suitable accommodations for their horses and cattle, before they lay out much money in building a house for themselves. The first house is small and built of logs. It generally lasts through the lifetime of the first settler and hence, they have a saying, that a son should always begin his improvements, where his father left off.

“They always prefer good land, or that land on which there are great meadows. By giving attention to the cultivation of grass, they often in a few years double the value of an old farm, and grow rich on farms, on which their predecessors, of whom they purchased them, had nearly starved.

“In clearing new land they do not simply girdle or belt the trees, and leave them to perish in the ground, as is the custom of their English or Irish neighbors; they generally cut them down and burn them. Underbrush and bushes they pull out by the roots. The advantage is that the land is fit for cultivation the second year.

“They feed their horses and cows well, thereby practicing economy, for such animals perform twice the labor or yield twice the amount of the less well fed. A German horse is known in every part of the state.

“The German farmers are also great wood-economists. They do not waste it in large fire-places, but burn it in stoves, using about one-fourth to one-fifth as much. Their houses are made very comfortable by these stoves, around which the family can get more equal chance than when burning their faces and freezing their backs before open fire-places.

“The Germans live frugally in regard to diet, furniture and dress. They eat sparingly of boiled meat, but use large quantities of all kinds of vegetables. They use few distilled spirits (whiskey and rum), preferring cider, beer, wine, and simple water. In their homespun garments they are likewise economical. When they use European articles of dress, they prefer those of best quality and highest price. They are afraid to get into debt, and seldom purchase anything without paying cash for it.

“Kitchen gardening the Germans introduced altogether. Their gardens contain useful vegetables at every season of the year. Pennsylvania is indebted to the Germans for the principal part of her knowledge of horticulture. The work of the gardens is generally done by the women of the family. Hired help is procured only in harvest time. The favorable influence of agriculture, as conducted by the Germans, in extending the most happiness, is manifested by the joy expressed at the birth of a child. No dread of poverty or distrust of Providence from an increasing family depress the spirits of this industrious and frugal people.

“In their children they produce not only the habits of labor but a love of it.

“When a young man asks the consent of his father to marry the girl of his choice he does not inquire so much whether she be rich or poor, or whether she possess any personal or mental accomplishments, but whether she be industrious, and acquainted with the duties of a good housewife.”

Enumerating other good qualities of the Germans, Rush says: “They are no strangers to the virtue of hospitality. The hungry or benighted traveler is always sure to find a hearty welcome under their roofs. They are extremely kind and friendly as neighbors.”

There were also among the German immigrants many mechanics, who found everywhere remunerative work for their skill and reliability. The conditions prevailing in the colonies were very favorable, as the practice of the different professions was not, as in Europe, restricted by the rules of guilds. Such corporations had not yet been started. In fact, they were impossible, as in the thinly settled and very extensive colonies all had to rely upon their own abilities. As in the solitude of the wilderness the farmer had of necessity to be a “Jack of all trades,” so in the villages and cities such craftsmen were most welcome, who could be helpful in many different ways. As Gottlieb Mittelberger, a German teacher visiting Pennsylvania in 1750, stated in one of his letters: “No profession is restrained by the laws of guilds. Everyone can make his living according to his choice. He may carry on ten different trades, and nobody will hinder him.