Some calculate that as many as 3% of the population of the United States may have been converted during what came to be known as the “Businessmen’s Awakening”.  In this largely forgotten chapter of American church history, we find the story of The Fulton Street Revival”.

The neighborhood was changing, mostly for the worse.  A lot of the churches pulled up roots and followed their wealthy parishioners uptown, but the North Dutch Reformed Church chose a different path.  Surrounded by a growing population that was unchurched and happy to stay that way, the church decided what they really had outside their front doors was a mission field.

The church committee, appointed on May 7, 1857, to devise the means to evangelize the neighborhood, came back to the consistory with a plan to send a lay missionary to engage in house to house visitation, inviting the local children to Sunday School, and organizing prayer meetings.  The man they chose was Jeremiah Lauphier, a local businessman who threw himself into the work with energy and purpose.

He knocked on doors, and visited local businesses.  He frequently stopped by the church for times of private prayer.  With so many travelers coming to New York City, he encouraged local hotels to refer visitors to the church on Sunday, putting up signs designating pews reserved for each of the various local hotels. A factory of ideas, Lauphier tried them all, but through his labors, he noticed that it was the time in prayer that brought him both peace and resolve.

He thought that, perhaps, others might be equally encouraged if they also spent more time bringing their petitions before the Lord, and so printed up little handbills and passed them out to the local businessmen. The message was simple:

He set up a signboard out in front of the building and quietly climbed the stairs to the room that had been set aside for the purpose. It was noon, September 23, 1857, and Lauphier, finding himself alone, began to pray as was his custom.  A half hour passed, and he was still the only one there. Then, he heard steps on the stair, and he was soon joined by his first visitor.  They were joined a while later by another, and then another – six in all, counting Lauphier.

The next Wednesday, the six became twenty, and a week later, forty. Many stayed only 5 or 10 minutes, but a growing number would stay the hour.  Before long, the meetings were changed to daily.  As the crowds grew, simple rules were adopted:

In other words, this wasn’t a debating society, or a place for the long-winded to hear themselves talk.  It was prayer action. People came with names of acquaintances and loved ones, pleading for their salvation. People began dropping off prayer requests, and soon there were more than 300 prayer requests a day. The meetings moved to a larger room.

The YMCA began holding similar noon prayer meetings at other locations around the city.  Other ministries joined in.  John Bliss, a young office worker from Philadelphia wandered in one day, and upon returning to his home city, began a similar noon meeting.  On May 18, 1858, only eight months after that first quiet gathering in the old North Church neighborhood, the Philadelphia group dispatched a note to their colleagues in New York. “Jayne’s Hall daily prayer meeting is crowded. Upwards of three thousand present.”

Where previous revivals and “awakenings” had been rocked by denominational and doctrinal divisions, the noonday prayer meetings were remarkably free from controversy. The agenda was simple.  All across the country, businessmen took up the banner, meeting specifically to pray for one another, and for the salvation of the lost. A burden for those without Christ was the unifying war cry of a generation, and the blessings of those answered prayers poured down like the latter day rains.

The following newspaper account of one of the meetings is a remarkable witness to the brotherly charity displayed.

“The meeting is begun at twelve o’clock precisely, and it closes exactly on the hour 1 PM. The room is full and crowded, and the interest appears to increase from day to day. It began with a modest meeting held once in the week. But attendance and benefit seemed to demand the more frequent observance of the privilege: now it has become a daily service. With the pressure came a larger attendance and a more spirited service. The probability is that the meeting will be adjourned to the church. Any one comes in or goes out as he pleases. It is the rule of the place to leave at any moment. All sects are here: the formal, stately Churchman and the impulsive Methodist who cannot suppress his groan and his “amen;” the sober, substantial Dutchman and the ardent Congregationalist, with all Yankee restlessness on his face; the Baptist and the Presbyterian, joining in the same chorus and bowing at the same altar. Not one woman is in the meeting, the singing from 200 male voices is really majestic.”

The Irish Presbyterians took note, and their synod sent over two observers.  When they shared what they saw and heard, their brethren were quickened to throw themselves into evangelism with renewed vigor.  William Gibson, one of the two who had visited the Fulton Street Prayer Meeting, wrote how the immediate aftermath in Ireland was the conversion of 100,000 to the cause of Christ. In New York, the meetings would go on for decades, long after the neighborhood had been razed, and the old Reformed Church torn down.

When the fires of evangelism cooled, ecclesiocrats would while away their time pointing out the messiness of it all, the lack of centralized control. Papers would be written, and methods condemned.  In such environs, there would be few prayers offered for the lost, and fewer converts, still.  There would no men gathered and praying by name for the conversion of the butcher or tradesman down the street.  No salving daily respite.

Today, we might assume an outpouring such as Fulton Street would be the result of a well-executed marketing plan, conceived by church growth experts and accompanied by conferences, celebrity podcasts and lots of branded merchandise.

Fulton Street was none of those things, and it was never intended to be.  It began and ended as a thirst for souls, and a conviction that unless the Lord builds the house, they labor in vain that build it. Social historians are quick to point out that the Fulton Street Prayer Meeting flourished precisely as the economy slid into depression, and millions suffered.

That’s true.  But it’s also true that the consistory of the old North Dutch Reformed Church didn’t launch their committee to create a neighborhood evangelism plan after the October 14, 1857 bank crash, but in May, five months before, making the Fulton Street Prayer Meeting a testimony not only to God’s grace, but to His providence, as well. The old North Church had a plan for the neighborhood, but as it turned out, the Lord had a plan for the nation.

Not only did the prayer meetings flourish among businessmen, but when the Civil War broke out shortly thereafter, tremendous revivals occurred in the camps of the armies of both North and South.  The church where the Businessmen’s Revival began had a confession of faith that spoke to both our “certain knowledge” and our “hearty trust.”  While some view piety and doctrine as polar opposites, the Fulton Street meetings were neither a rigorously theological movement, nor an exercise in mere pietism.  Indeed, one of the lasting results of the movement was the replacement of an effete moralism with genuine piety.

If there is a lesson for us – and there is – it is to not despise the day of small beginnings, for the harvest is truly in God’s hands. 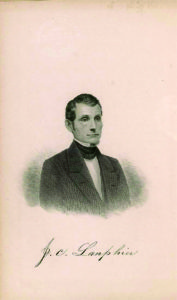 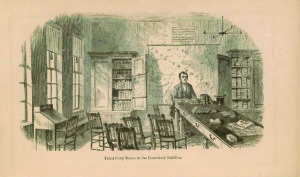 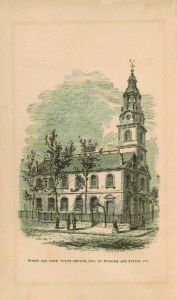 More Than A Cowboy